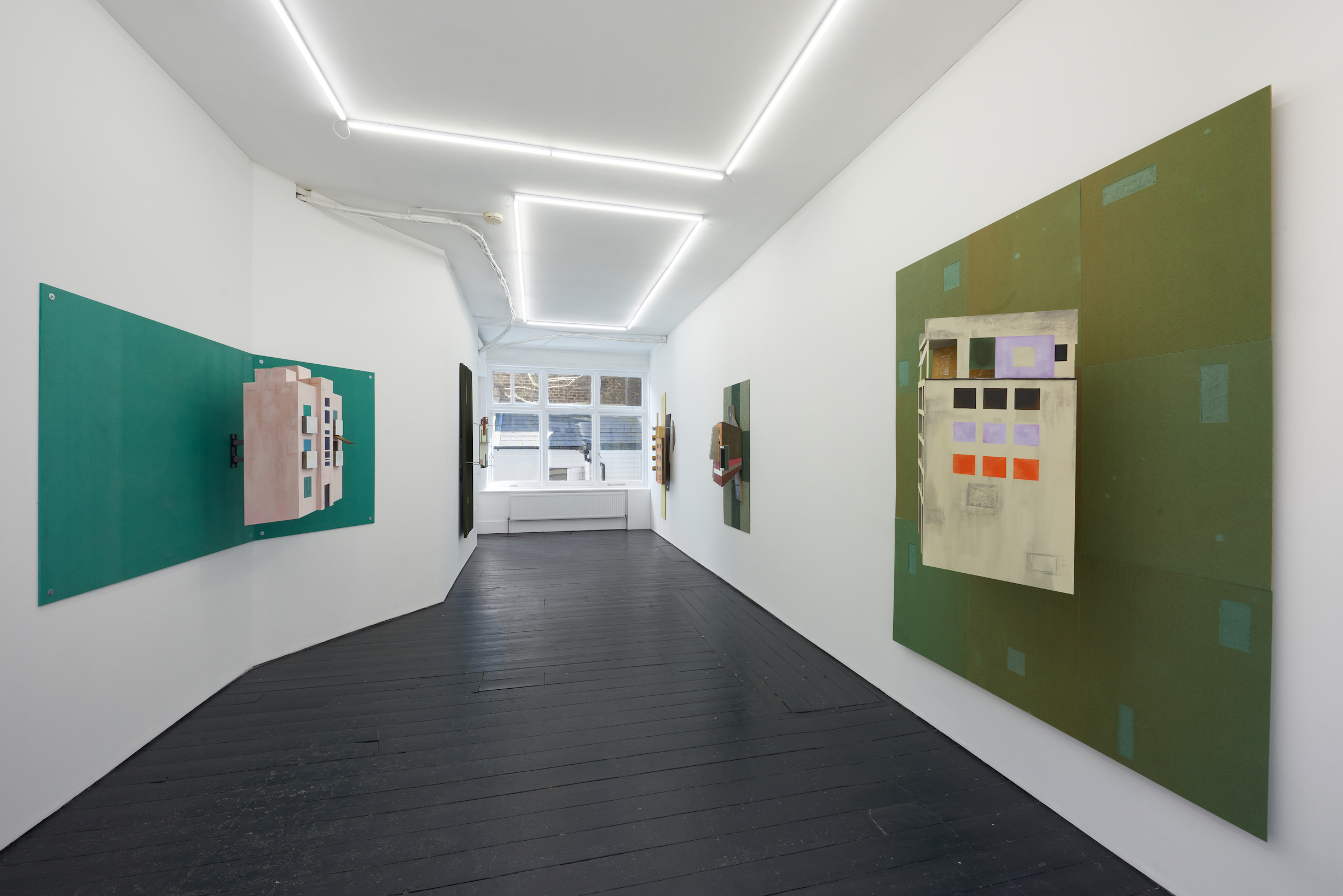 Emma Cousin has written an essay on British artist Milly Peck's solo show currently on view at VITRINE Fitzrovia 'Front of House'. The exhibition presents new sculptural works influenced by studies of residential buildings produced on residency as part of the Bridget Riley Fellowship at the British School at Rome in Italy during 2021.

Emma Cousin is a drawer and painter working in Peckham, London.

‍The Props assist the House
Until the House is built
And then the Props withdraw
And adequate, erect,
The House support itself
And cease to recollect
The Augur and the Carpenter –
Just such a retrospect
Hath the perfected Life –
A Past of Plank and Nail
And slowness – then the scaffolds drop
Affirming it a Soul – [1]

During her six-month Bridget Riley Fellowship residency with the British School at Rome, Peck 'collected' buildings, taking photographs. Working from watercolours made from this collection, Peck questioned what would most accurately represent a colour or a texture as a visual cue - often something found, tarnished, out of studio bins - something 'sensorially specific.' [2] A tussle between things trying to be real: and things pretending.

Art and camouflage are in reality obverse and reverse of a similar practice: the former makes nothing look like something, which the latter, as Humpty Dumpty might have said, makes something unlook like itself. [3]

Peck's marks are material led– chalk and paint, - which in the past had been a sanded or routed mark. Chalk is used optically to highlight or make an area move, like commas in a cartoon. 'The chalk is like blusher; it plays with your eyes. From different angles it can create dense black or light shadow.' The speed or temperature of an action recorded in how a mark is made. Selected as an inherently fragile medium, chalk is easily smudged and must be built up. Peck talks lyrically about its relationship to papier mâché, a knowledge from a long time ago that is technical but also basic.

Memory pulses through these works, translations from experience, drawing, photographs, watercolour, sculpture in a hybrid relay where forgetting and misremembering quiver.‍

Like in a dream certain things become exaggerated or miniaturised or idealised depending on how I want to see things and because I'm not trained in architectural drawings and they don't have to function, in built into them is impotence.‍

Based on Peck's collection of stark and perfect modernist buildings cut into the suburbs of Rome her rememberings are expressive, and handmade.

What Rossi means by architecture is not always a building. The form of buildings which persists through time, is a product of history, accreted over countless generations and infused with the presence and sensation of memory. [4]

The architect Aldo Rossi was rebuilding in a functional way but with a post-war material shortage. 'The blocks rise straight out of the dirt without glazed windows. They are almost like ruins immediately.'[5] Peck's structures come together out of offcuts, scavenged materials, and redundant discoveries; 'Bits of leather from an old rucksack that died in Rome because the zip broke.' Making the works in London during residential construction surrounding the Peckham studio set a tone of renovation, cladding, rendering. Valchromat, MDF, plywood, oak, acrylic, gouache, and materials to hand harbour a level of play as well as set limits that allow more imaginative construction and reaction. These geometric investigations[6] Peck calls collages, employing an improvisational 'cut' and darting around.

(Ellsworth) Kelly used (collage) instead as an inert or anonymous material to vigorously test spatial and organizational possibilities. Inherent to collage, of course, is the artist's freedom to rapidly rearrange loose pieces.[7]

Collecting discarded and found items from Rome, Peck made drawings in attentive detail: a puffer jacket, a pine cone, a packaged snorkel mask. Their tender rendering in pencil holds Peck's way of learning the city, diarising, locating herself physically. The act of drawing breathes them back into life and emphasises their flatness.

Peck visited a panoply of sites in and outside of Rome. A display of gladiatorial armour at the National Archaeological Museum of Naples, artefacts displayed at human height, outer carcasses relate directly to the drawings and the sculptures. 'Il costume de casa'.[8] Peck's representations of spaces, interior and exterior, are empty. Figurative imagery on Peck's studio wall prominently includes Etruscan funerary urns and the painting 'Archeologi', by Giorgio de Chirico 1968.

De Chirico's metaphysical paintings appear as discrete scenes from a dreamed labyrinth, enfolding interiority and exteriority into haunting and nostalgic spaces that have not and could not exist. His reliance on a discursive architecture mask not only the obscure origin of painting but presents in its place sophisticated musings on imaginary spaces whose origins are also obscure.[9]

Peck's structures, alluding to torsos, (perhaps De Chirico's 'Torso Monuments') lack corporeality. This absence is their style. Some Etruscan urns use a building as a domestic motif to house ashes; the building becomes the body.

To move the sculptures around the studio Peck must hug them. They become leaning bodies protecting the spaces inside frontally in their pictorial insistence. ‘Front of House’. From the Roman architectural treatise of Vitruvius through the Renaissance, the body has been the traditional bestower of meaning forming architectural space.

In Pecks 'sets', we are made to move, restricted in our perspectives and implicated in our bodily relationship with these 'torsos'. The historian Richard C. Beacham rebuilt a comic stage set and contrived students to perform 'Casina' by Roman playwright Plautus to expose how the structure of the set facilitated the movement of the characters, [11] enhancing the physical comedy of the characters.

MDF and Valchromat facades, harshly askew and oddly real are like stage-sets. We are on the cusp of something. When theatres became permanent structures in stone, early Roman wood sets became redundant; wooden temporary sets continued to be made for wealthy people to show off; the absurdity of display. 'Front of House', a modern day 'show room'. Some works have blind windows, others we look into to see —nothing–aspirational cul de sacs. Influenced by ancient stage sets- three doorways, often multi-storied - and specifically comic stage sets featuring residential buildings, Peck presents the balconied façade as a curiosity that sits between function and decoration, between public and private. Her colour palette relates like place holders. In the process of translation even the colours become caricatures. The work's 'Mediterranean palette' is truthfully worn, implying pollution, and adapted from memory, it feels like the scuff, the scrape, the scumble of Peck's surfaces. These sculptures are pervaded with the sounds of their making, a trace of time, the artist's attempt at trompe l'oeil, her sleight of hand.

Influences include a thesis on Harry Potter World 12, zoos, Baudrillard's writing on Disneyland [13]. Peck is preoccupied by imitations that 'seem more real than the real thing'.

Allocated spaces to experience something outside of the real, are more real somehow...theatre is a space that directly and overtly reflects reality in a way you're aware of. Even shops exploit this gap: It is more subversive and insidious. Theatre is frank about how it's trying to reflect reality.

Peck approached each of the works with a decision about the dominant face, which then dictated the angle of the perspective. Inventing, selecting, and remembering gave her a sense of power over these humble sculptures, flattened by drawing and watercolour, to govern what to flesh out and what to reduce, what to represent pictorially or physically. Their latency suspends us in a balance between ironic imagination, illusion, and disappointment. The result is a vertiginous visual experience.

Fakery is absurd and ominous, the points at which it becomes indecipherable. As technology becomes more advanced it becomes harder to find the clunky bits, our everyday lives' fakery is becoming much harder to observe. There is a humour to this but only when its perceptible.

We don't have a definition of the parameters in Peck's artworks though they have domestic elements and certain signifiers – tv brackets, carpet tiles. Apertures and angles are convincing and unconvincing depending on pictorial invention from sculptural form.

Cinecittà Studios in Rome, the largest film studios in Europe, constructed in 1937 provoked Peck. 'As a visitor a funny thing happens; you look at the front and round the side where you see the scaffolding, the collapse.' The holding up of the set-up. It is neither one nor the other: both can be seen concurrently. 'When things are setup to look grand there's pathos and humour in discovering their flimsiness.'[15] Peck wanted to afford this privilege to her viewer, to see 'the behind' of the structures and invite them in on the joke. By allowing us to cross that threshold she affords an agency harking back to plays in the round, not just looking but part of it, whilst also shattering an illusion and making us complicit in it. The staging of these objects to include 'behind the scenes', placing the 'off-stage' centre-stage reveals a space which is usually hidden.

Alan Ayckbourn has been a consistent recent influence on Peck. He gave Peck's dad one of his first jobs, (both her parents are actors) and his work 'Absurd Person Singular' resonates throughout 'Front of House'. The focus in his play is on offstage action where the audience must imagine spaces that they cannot see from where dialogue occurs, often in opposition to spaces they are looking at on stage. Peck makes us imagine interior and narrative; offstage is as important as 'Front of House'. The 'absurd' in Ayckbourn's farces exposes the banality of middle-class preoccupations, his domestic settings housing an emptiness of emotional connections. His plays are all staged in the round: 'The round asks you to develop your own visual imagination in order to create somethings that aren't there.' [16] The farcical and ironic idea of watching something you can only hear and seeing something that undermines itself through its self-exposure and self-awareness is flipped by Peck who presents a set, framed and bracketed where we must fantasise everything about its context and content.

The theatre set as a frame has undergone flattening through western history. Peck researched identifications of types of frescoes, often dictated by framing mechanisms, which evolved framing systems for their narratives.

The imagination demands the real thing and to attain it we must fabricate the absolute fake; where the boundaries between game and illusion are blurred, the art museum is contaminated by the freakshow and falsehood is enjoyed in a situation of fullness. [17]

Rossi used the analogy of a skeleton to describe a city considering its history or ruins as foundations for future things to become flesh. ‘Front of House’ plays with the alternates of futuristic planning and nostalgic remorse. These spaces, torsos, buildings, dreamed up or remembered are facsimiles of a place, an experience, its history, and its possible futures. We are invited to the Front of House to imagine and embody what might take place questioning who we are under the facades we put on in public life. 'Once you uncover people, they reveal their other sides very quickly.' [18]

'Front of House' confronts with the vulnerability of its candour, hope in its proposal and pathos of its failure. Hanging in off-kilter jaunty cadence these sculptures underline their authenticity. 'A truth about art is the company it keeps with the slightly askew, the fly in the woodpile of symmetry.' [19]‍

Then the scaffolds drop
Affirming it a Soul – [20] 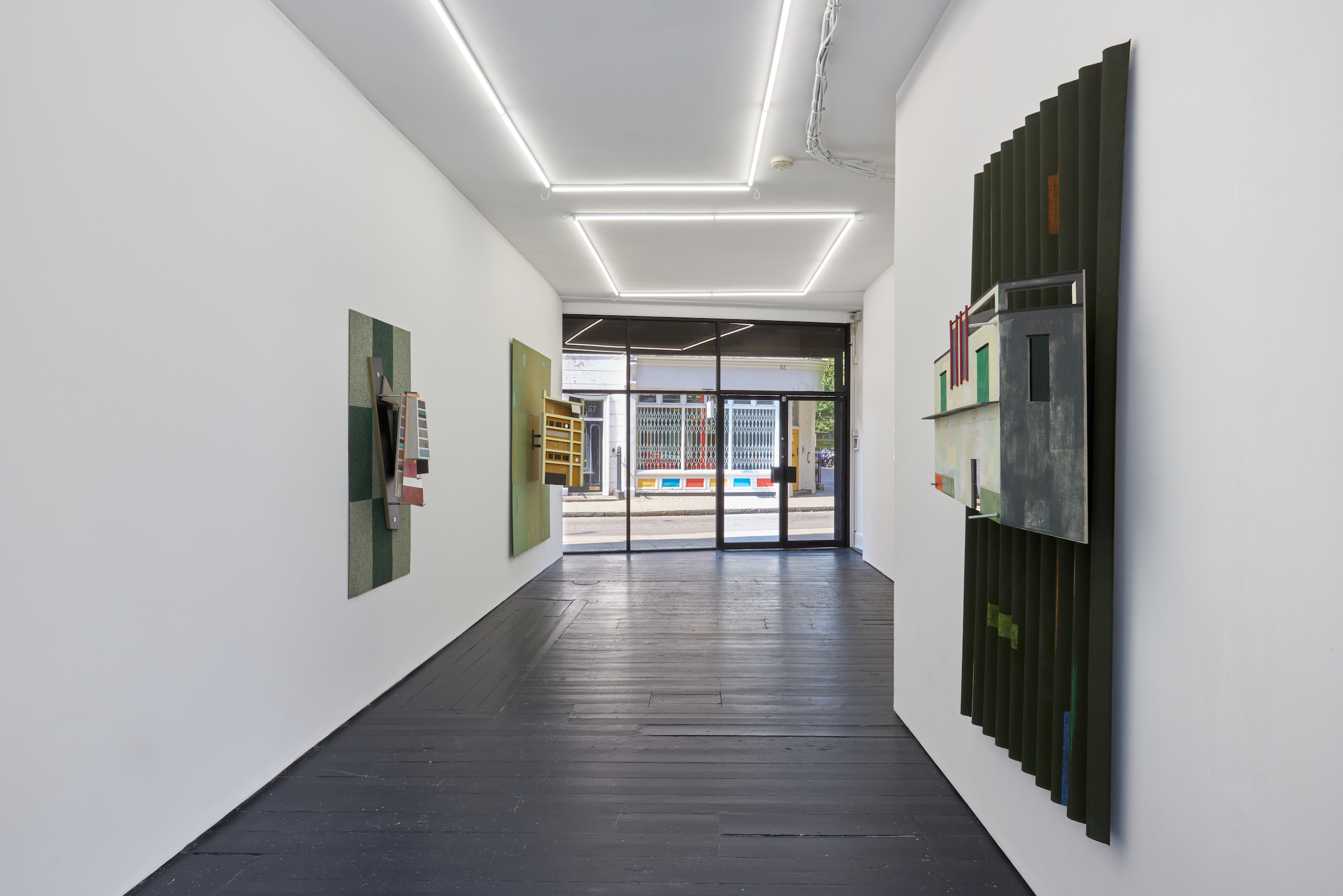 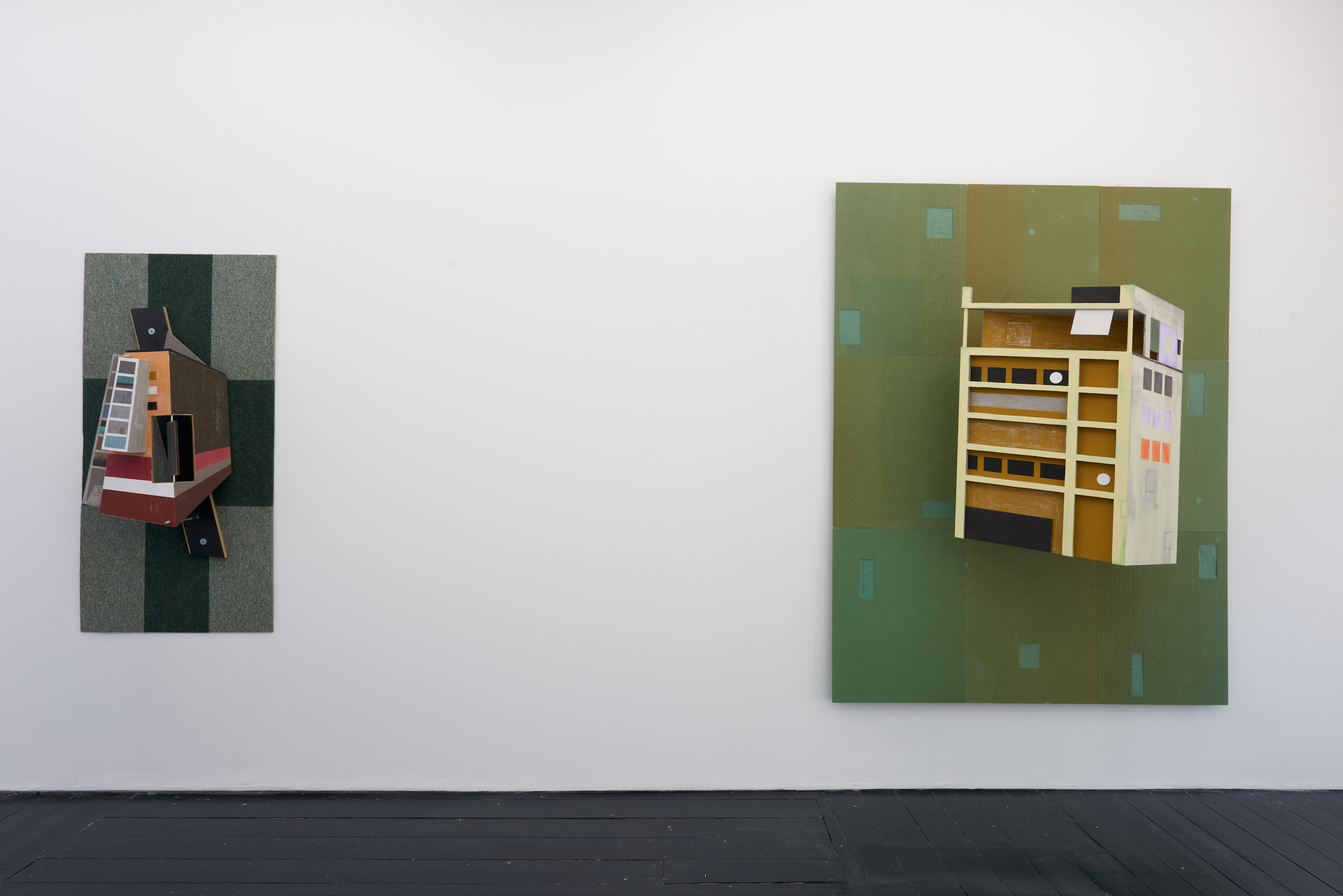 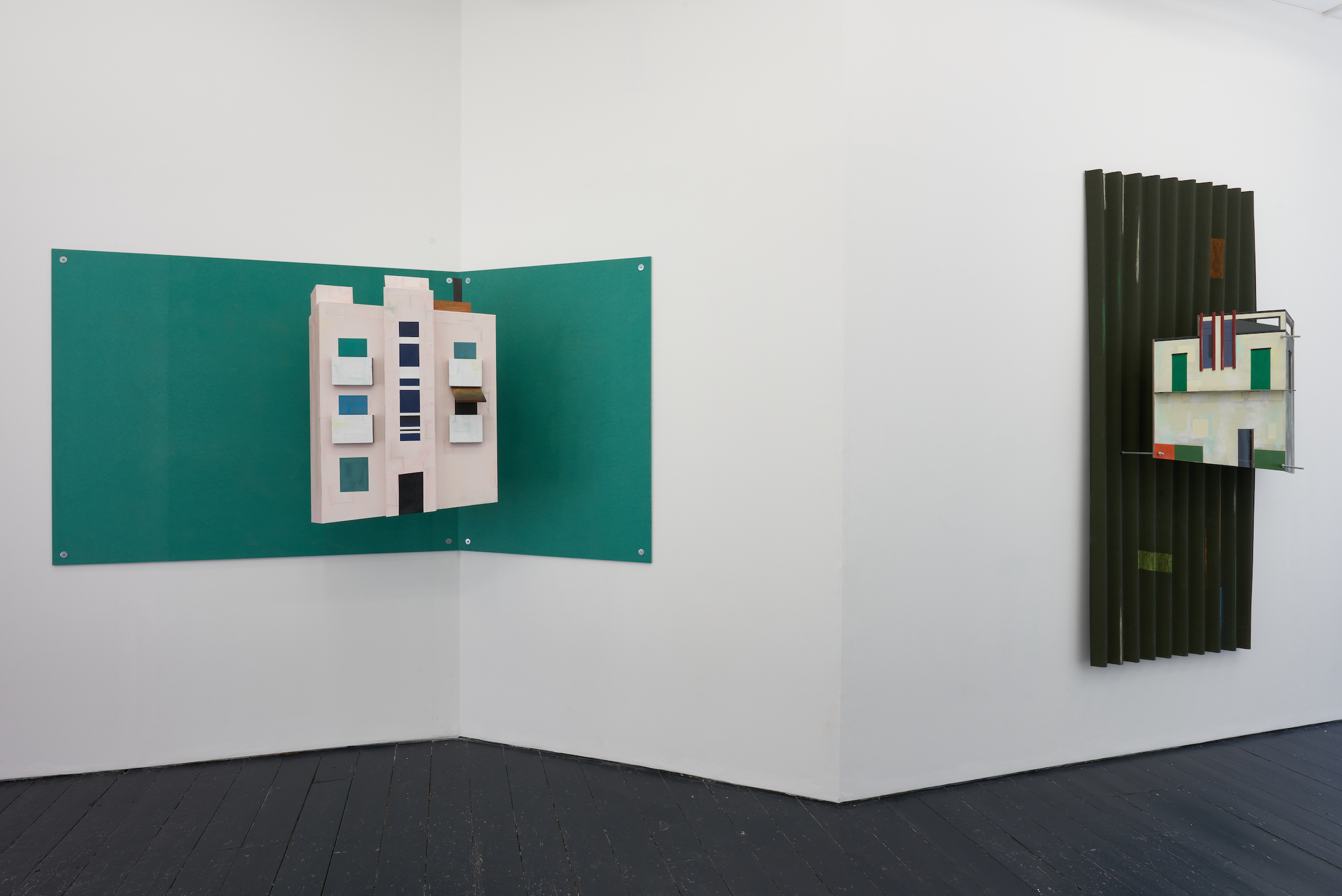 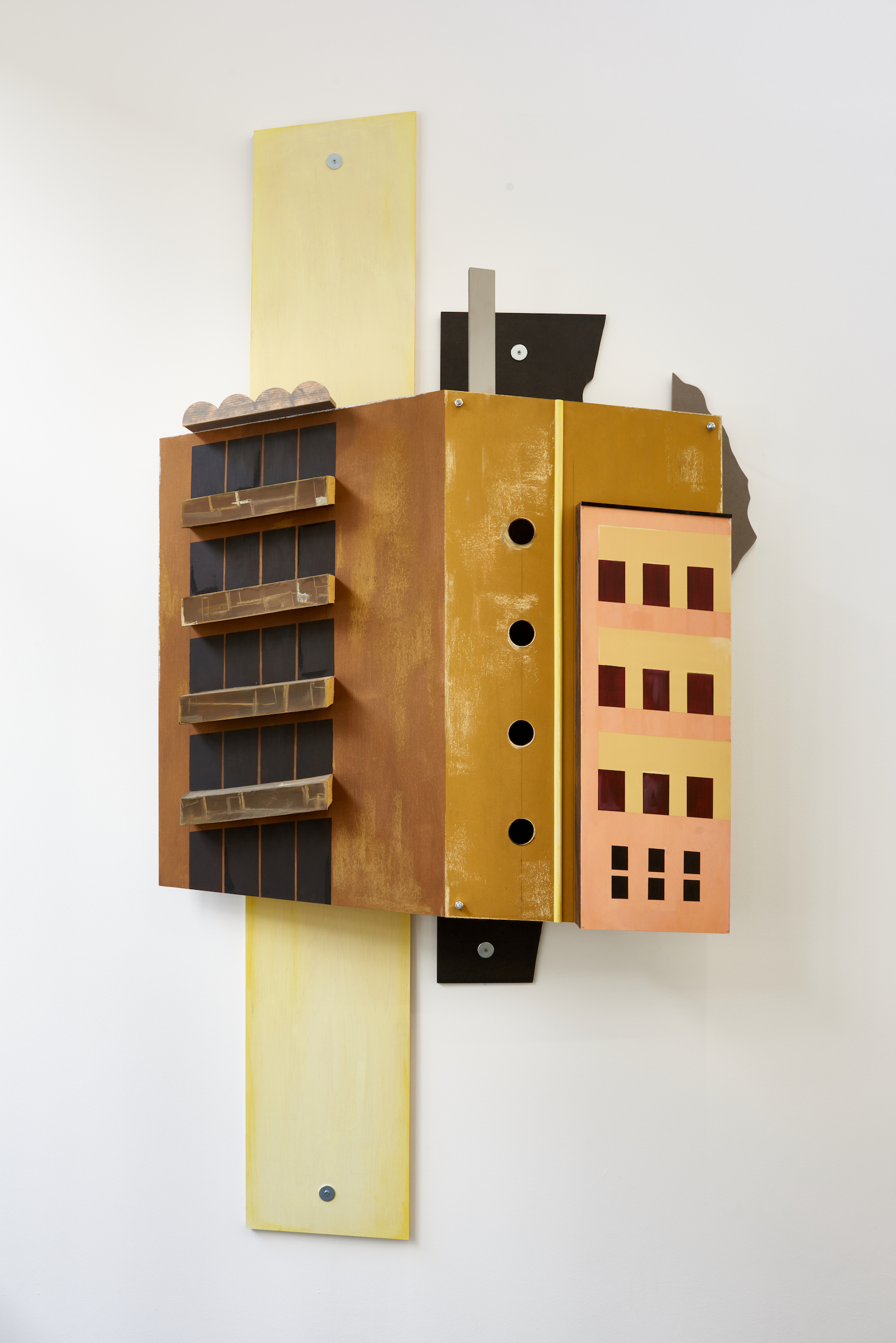 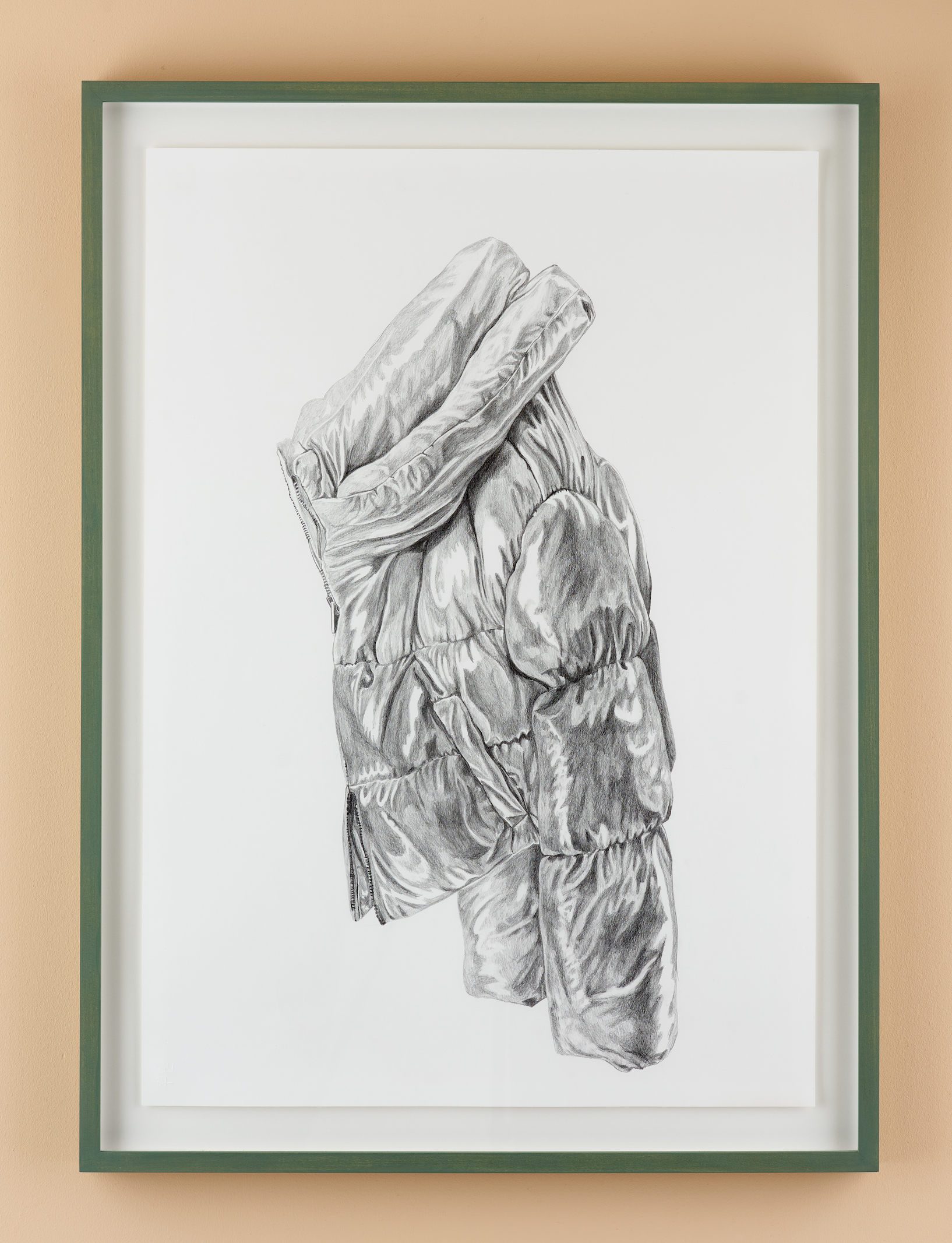 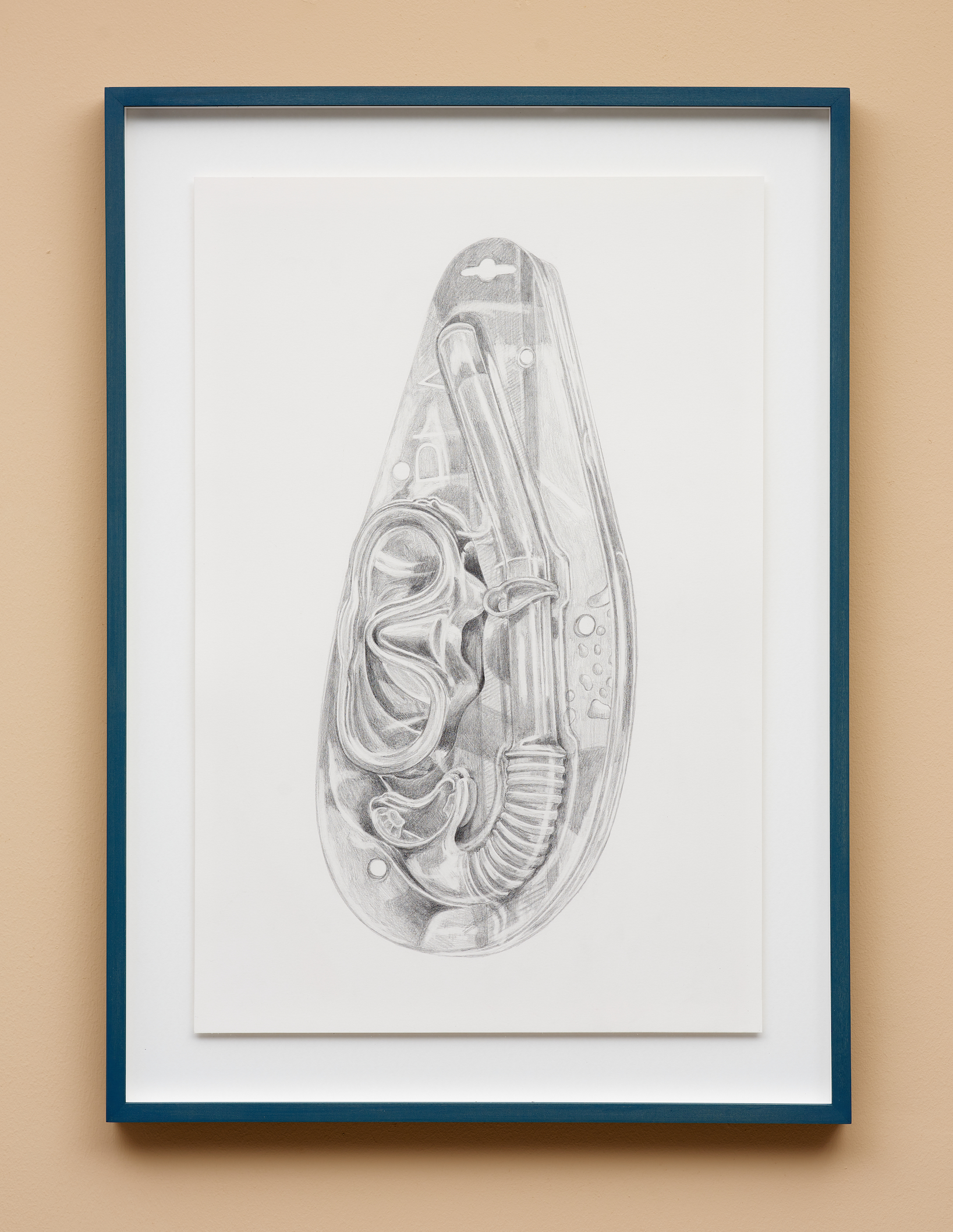 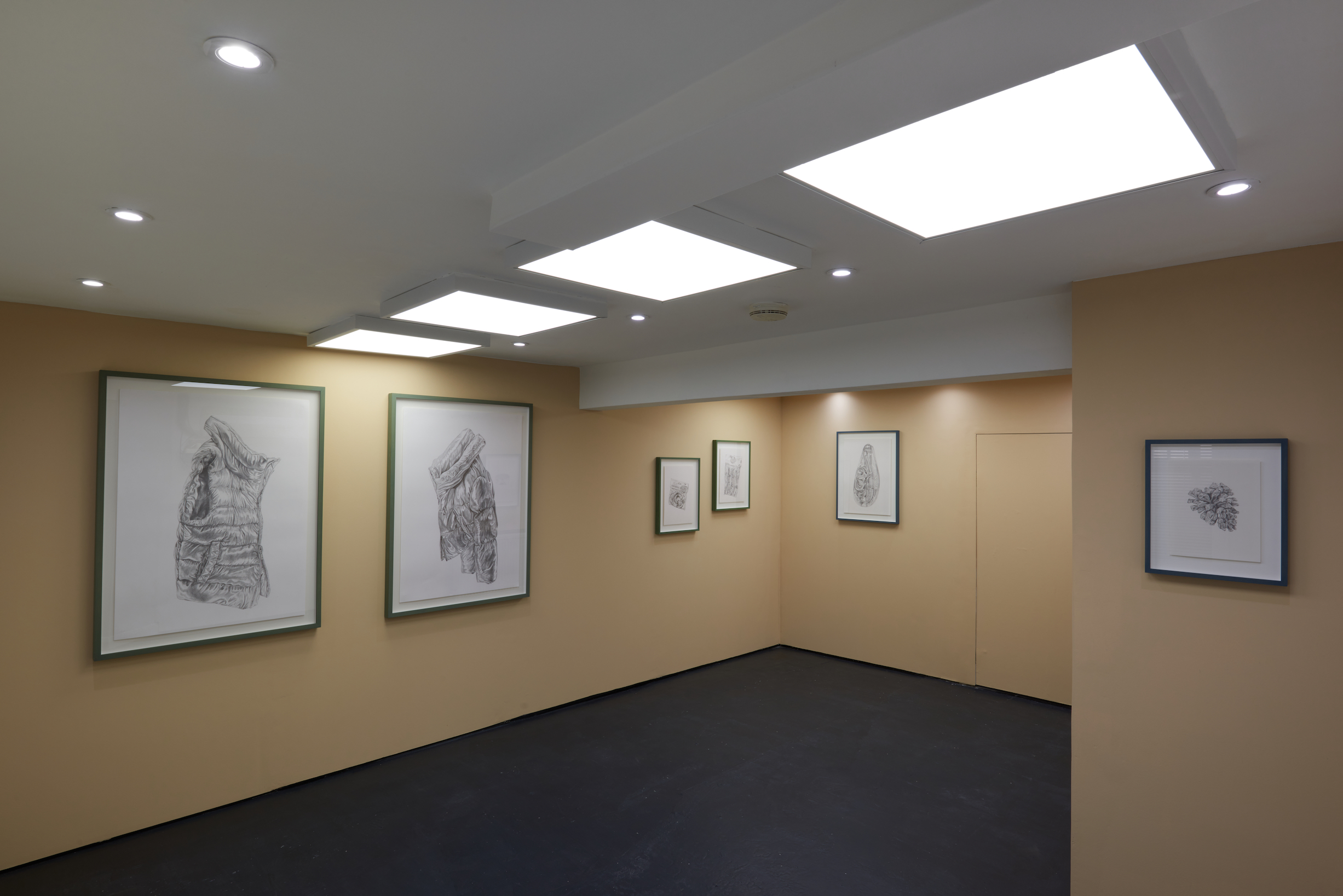