‘Front of House’ is a solo show by British artist Milly Peck. The exhibition presents new sculptural works influenced by studies of residential buildings produced on residency as part of the Bridget Riley Fellowship at the British School at Rome in Italy during 2021. These three-dimensional works are being shown together with drawings on paper from an extensive ongoing series of still life studies, which were also produced in Rome, alongside a new outdoor sculpture. 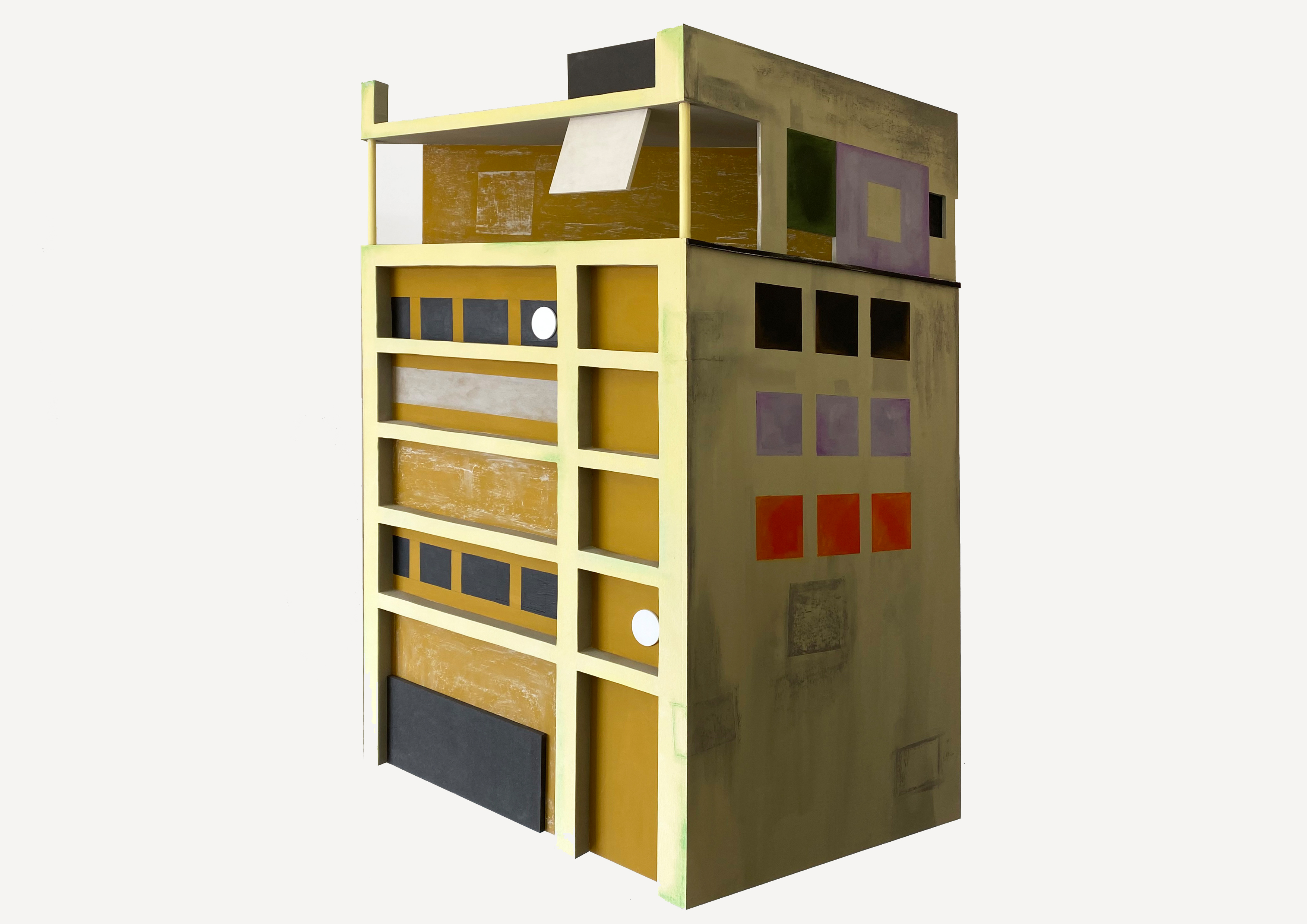 Peck’s research during the residency was centred around the physicality of ancient Roman stage-sets, particularly the prevalence of temporary wooden structures used before the later construction of permanent stone theatres. The artist is interested in the depiction of these early theatrical backdrops in Roman frescoes, particularly – according to archaeologist August Mau’s system of identification – of the Second Style which commonly feature dramaturgical imagery, which typically played with depth perception and illusion. The testing of imitated three-dimensionality and forced vantage points is mirrored in Peck’s new series of sculptures, which attempt to build both false and illogical perspectives.

Peck concurrently began observing contemporary residential buildings and apartment blocks of the Roman suburbs, as opposed to the historical architectural landmarks famous with the city’s tourists, recognising crossovers with modern design and that of the supposed ancient comic stages, with balconies, repeated windows and doorways, creating stage-like, performative spaces, at once public and private. She also became interested in the work of Italian Postmodernist Aldo Rossi after seeing his retrospective at MAXXI Rome, which included the architect’s drawings, painted studies, theatrical set designs and his micro-architectures reflected in domestic products, which he designed for companies such as Alessi.

Based on pencil and watercolour studies of buildings, Peck’s sculptures are made partly from the ephemera of the studio. These combine off-cuts and leftover household paints with more delicate materials, processes of papier-mâché, coloured pencil and layered chalk pastel. These works on paper are suggestive of the urban landscape and the weathered patina of metal flashing or polluted, worn stucco. Comprising extendable television brackets, sound-proofing tiles and building sheet materials – belonging to the speed and fleeting nature of modern everyday living and the stage set itself – these works fixtures and framing systems also suggest an aspirational DIY culture.

‘Front of House’ reveals a shift in the artist’s sculptural practice, away from the depiction of slapstick to the creation of literal three-dimensional forms, alongside a transition that has created a larger dichotomy between drawing and sculpture. Over the past two years, drawing on paper has become an increasingly important part of Peck’s practice and the exhibition presents these drawings alongside her sculptural works for the first time. The works presented in gallery two depict objects that deal with similar subjects of volume, fakery, surface and façade in Rome. A puffer jacket echoes the inanimate form of a torso, and an inflated balloon simultaneously resembles a voluminous cavity and a flat graphic letter ‘X’. Peck has used this medium as a way to record and map the city through its props and by-products.

Referring primarily to the physical space of the theatre preceding the stage, ‘Front of House’ comically doubles as a literal description of sculptural works that appear to depict miniaturised building facades. Peck’s turn of phrase in this context aims to pull into question the space in between the public and private, interiority and exteriority and flatness and three-dimensionality.

Finally, an example of Peck’s outdoor work, shown in the gallery courtyard, transform an architectural sculpture into a functional bird feeder stand. Works in this ‘Feeding Folly’ series parody the obscure trend within the aristocracy of fifteenth and sixteenth century England to commission ornate birdcages that mimick buildings such as castles, abbeys and cathedrals in Doric, Ionic and Gothic style.

Current exhibitions include the 6th Edition of Contemporary Sculpture Fulmer (until 1 October 2022).

VITRINE, Fitzrovia
Receive updates on exhibitions, shows, events, and artists.
Thank you for subscribing to our mailing list. Please check your emails to confirm.
Something seems to have gone wrong while submitting the form, please try again