Curator Stella Sideli on Nicole Bachmann's 'hovers above the chest' 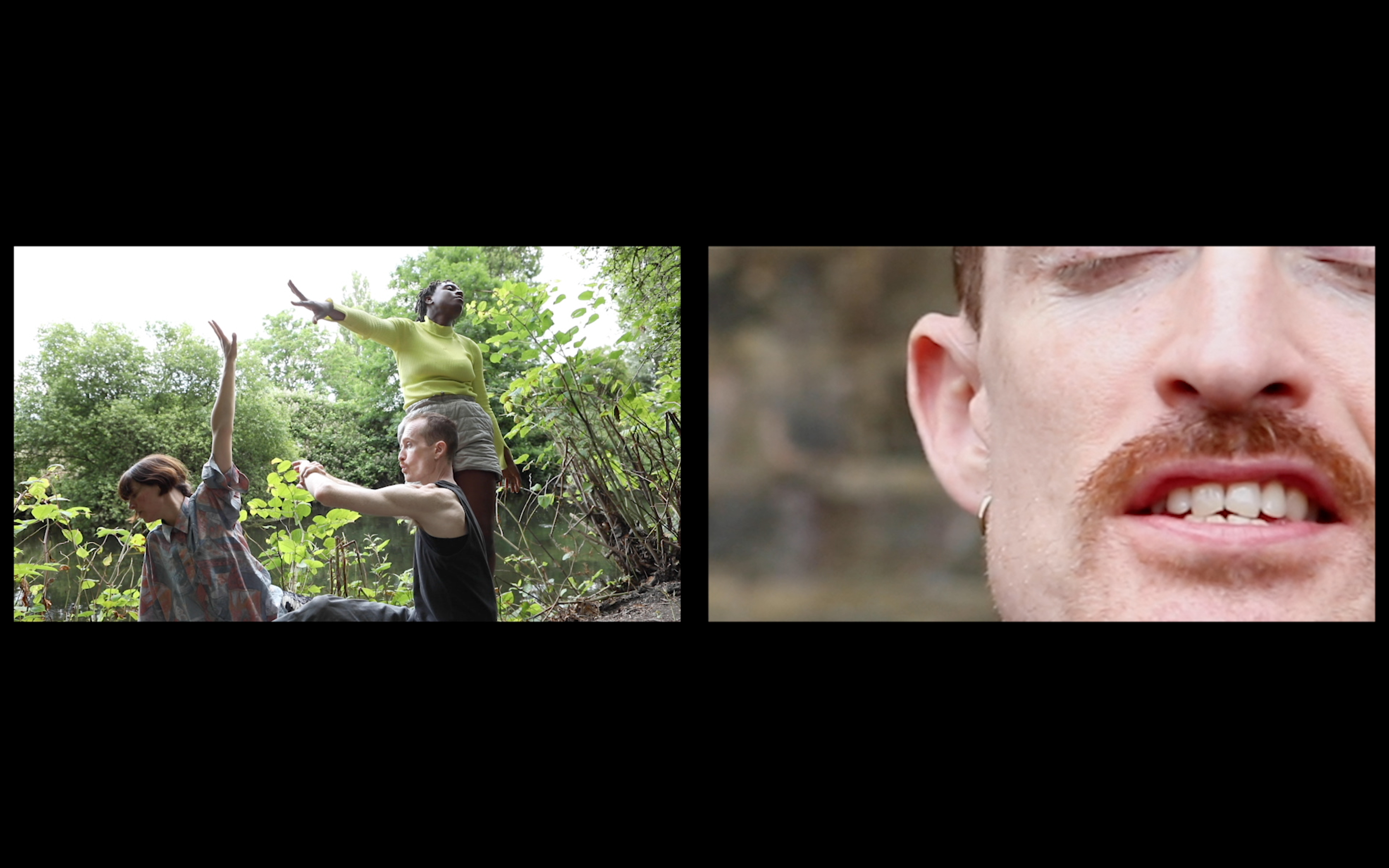 Curator and writer Stella Sideli has written a text about Nicole Bachmann's recently produced 2 channel, 3 speaker video installation 'hovers above the chest' (2022) currently on view as part of 'The London Open 2022' at Whitechapel Gallery, London, UK.

Stella Sideli is an independent curator, researcher, consultant and coach in the arts, based in London and working in the UK, Europe and the Mediterranean.

hovers above the chest

'hovers above the chest' (2022) is a video work by artist Nicole Bachmann. Filmed in East London's Hackney Marshes in 2021, it follows three characters on their erratic journey in the marshes and through the canal. Inspired by writers including Donna Haraway, Octavia E. Butler and Rosi Braidotti, the work explores the interrelation between bodies and environment, with a focus on the roles of voice and movement.

As we start watching the work, we are taken by a sense of rhythm (traditionally defined as the relationship between one beat and the others), embodied by the performers who create community around each other and visually create a kind of composition, a movement, in its many meanings: a self-sufficient piece of music in terms of key, tempo, and structure; an act of moving; placing things in a different order or position, change; a group of people working together to advance their ideas.

Combination(s) and rhythm(s) in this sense(s) manifest themselves in the relationships between the performing bodies, and, simultaneously, between the bodies and the environment.

Additionally, an important layer that contributes to pace the work is the double channel view: one part focusing on details inherent to one performer at a time, and the other part giving a wider view including the group and its surroundings. This creates a sense of chorus and soloist, mixed up on a tangled timeline, accessible at different points simultaneously.

The voice is a key element, a further articulation of the expanded idea of movement that comes up in the work. Voices interlace chorally and emerge separately, creating dissonance and perfect harmony at the same time.

Repetition, breaks, pauses, hissing and howling bring us to understanding voice as the rawest of human tools to communicate and express. Between voice and movement in this sense, a new kind of epistemology emerges: 'looking with the whole body brings other organs into play, lungs, heart liver and heart. It involves a metabolism and rhythm with the cosmos. Thus knowing is a bodily political practice that is repeated, composed but also that overflows' 1.

Time in the work is non-linear, compressed and expanded at the same time. A kind of slow, tortuous future. A future in which the three performers are like sharers (similarly to the characters in O. E. Butler's "Parable Of The Sower"): hyper emphatically looking for solidarity and connection when the outside world seems to have replaced these with mass alienation and displacement. They do their best to use their body and voice as forms of expression, as vehicles to make connections and to build kinship. Metaphorically, but also bodily and relationally, between them and with the multiple ecologies that surround them.

Water, for example, is the fourth active character in the network they are placed in. Its presence reminds us where we come from and where we are going, while cradling our present - containing collective stories and histories, touching and infiltrating through skin, wounds and other orifices, viscerally connecting the performers bodies and their fluids, their essence.

This helps us understand the situation beyond the binaries that have built up the concept of body throughout the formation of languages in the majority of the western countries, e.g. inside/outside, male/female, human/non-human or nature/culture, by offering fluid solutions to create new approaches to the idea of the body, in the best feminist new materialist tradition. We could say that Bachmann's work revisits the idea of the body without organs: an extra personal, not-yet-organised level of affective qualities that allows new perceptions, new connections and new affects. Going beyondstructures, the corporeal is a placeof relationships involving all the possiblebinaries at once andeverything in between.

Traditionally, in Bachmann's work, the use and misuse of the voice has represented the main tool to dismantle hierarchies and binaries; and specifically in this work, the characters go a long way to explore further solutions that can not only deconstruct but also assemble, and shape new perceptions and meanings. 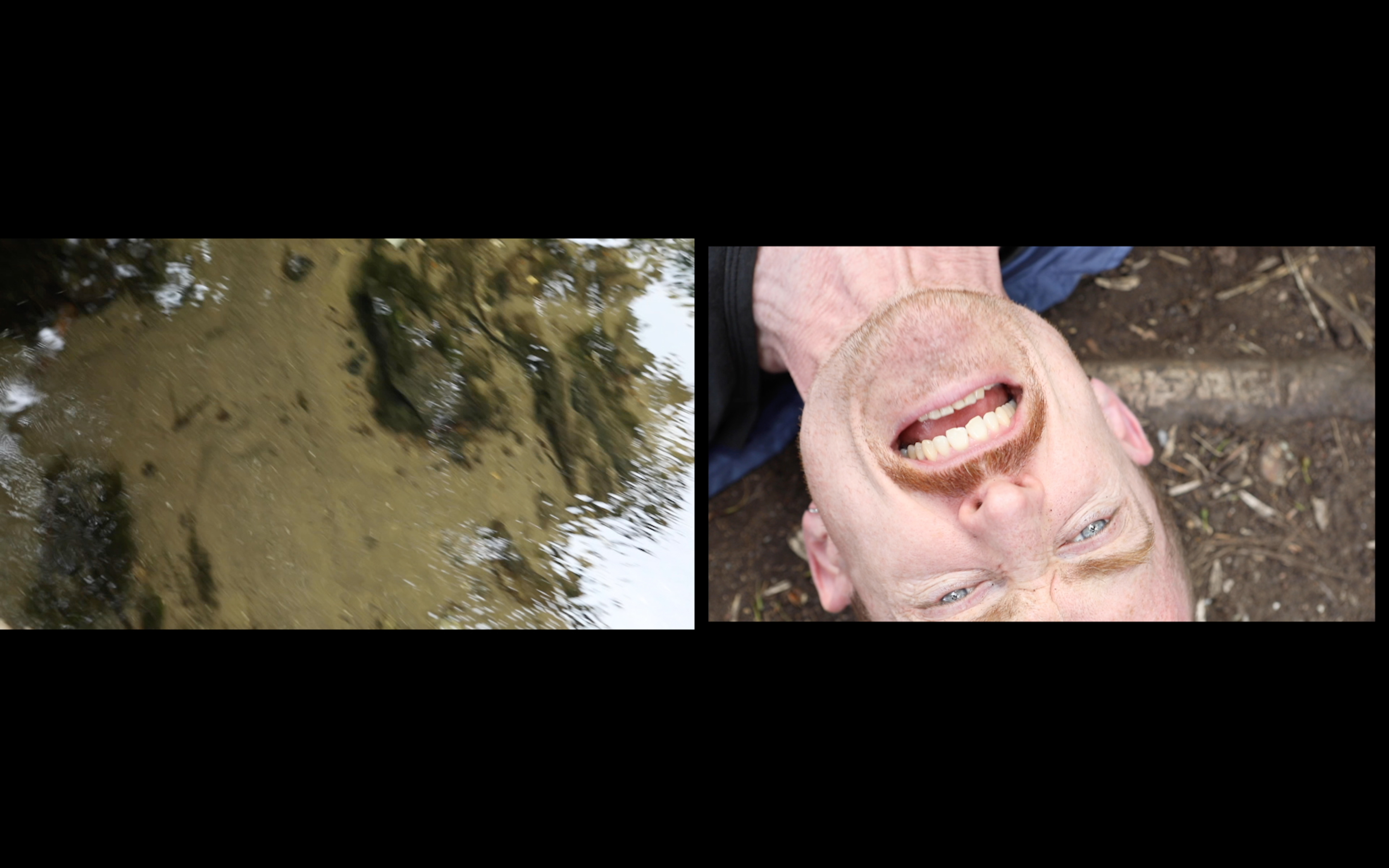 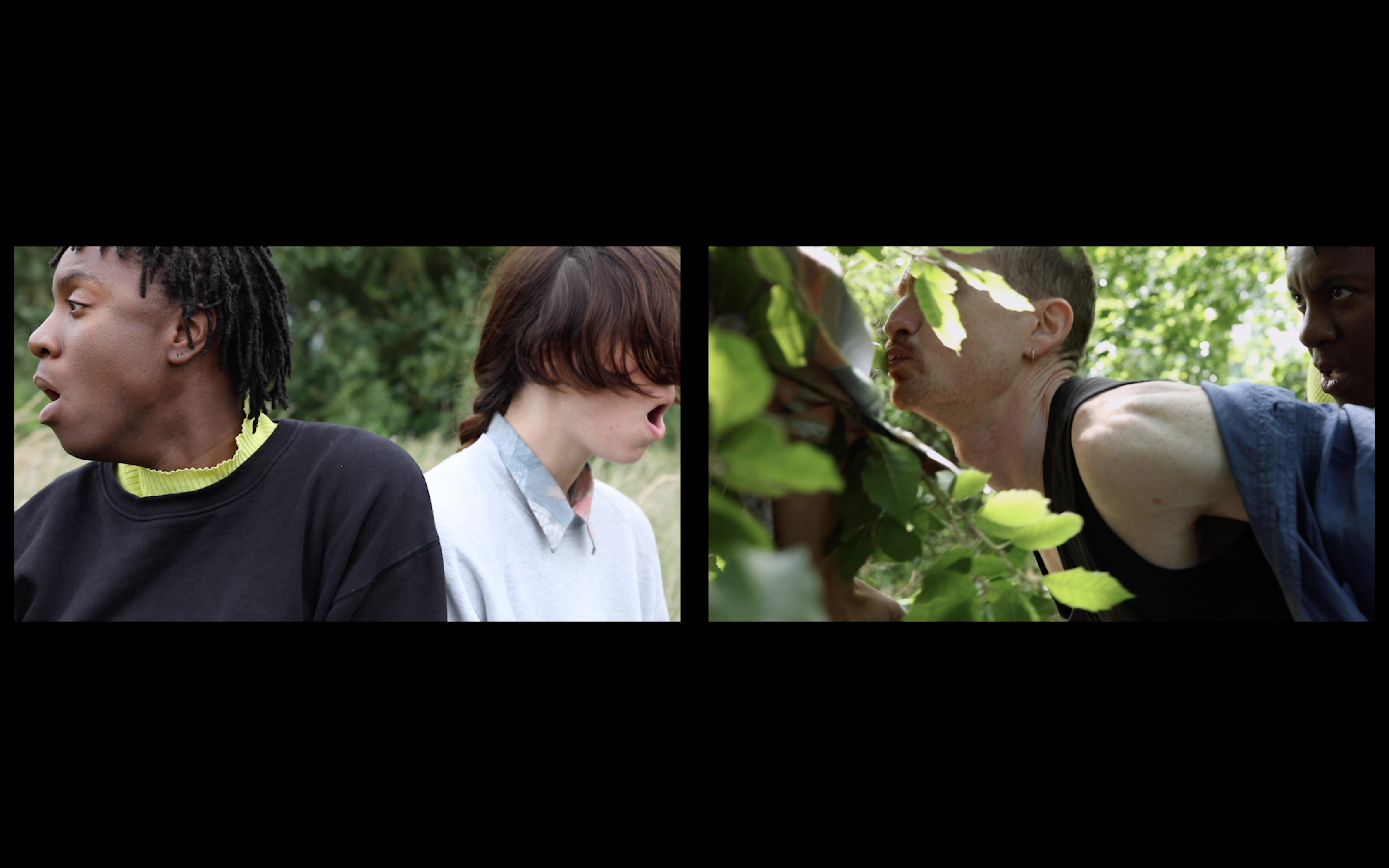 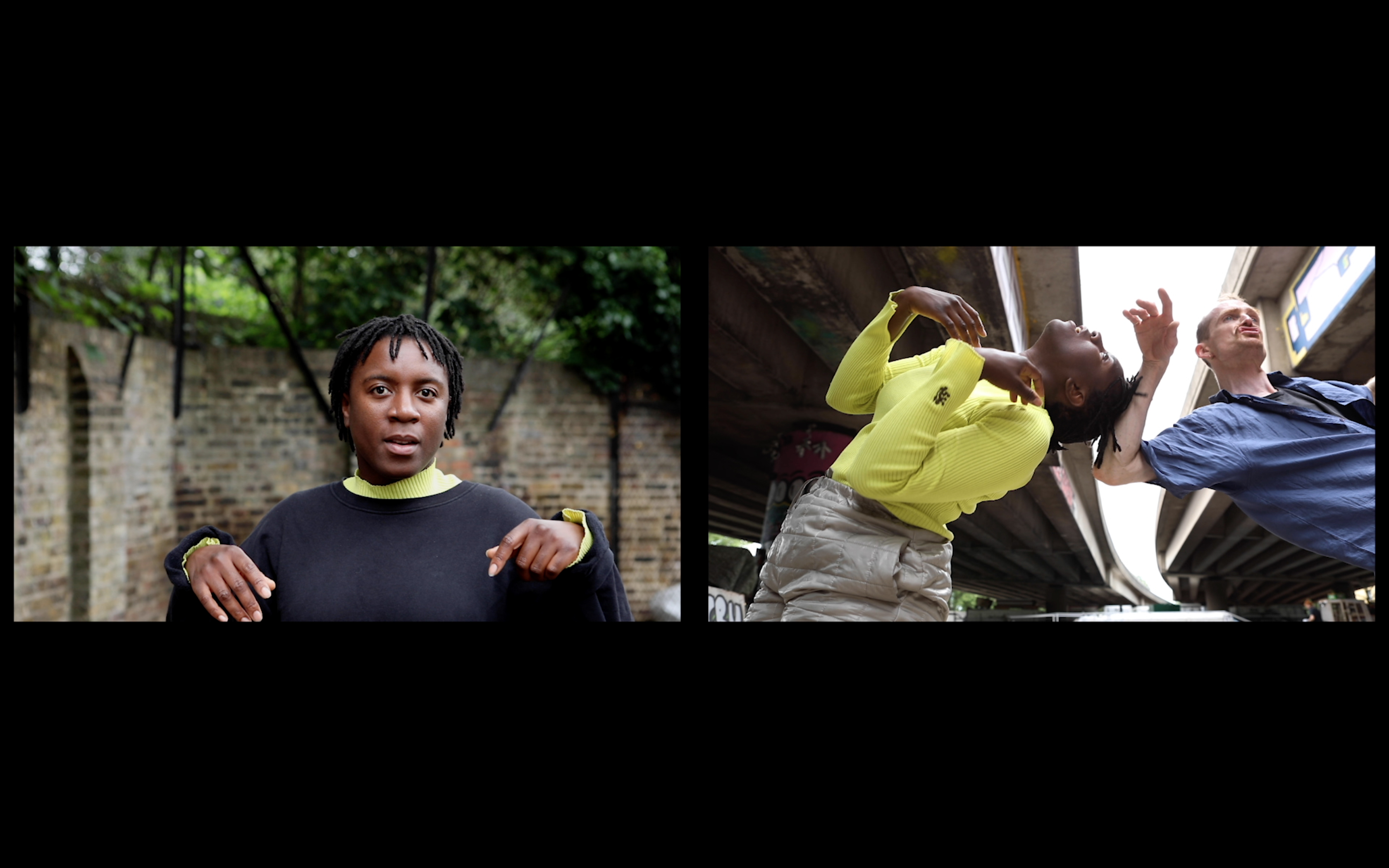 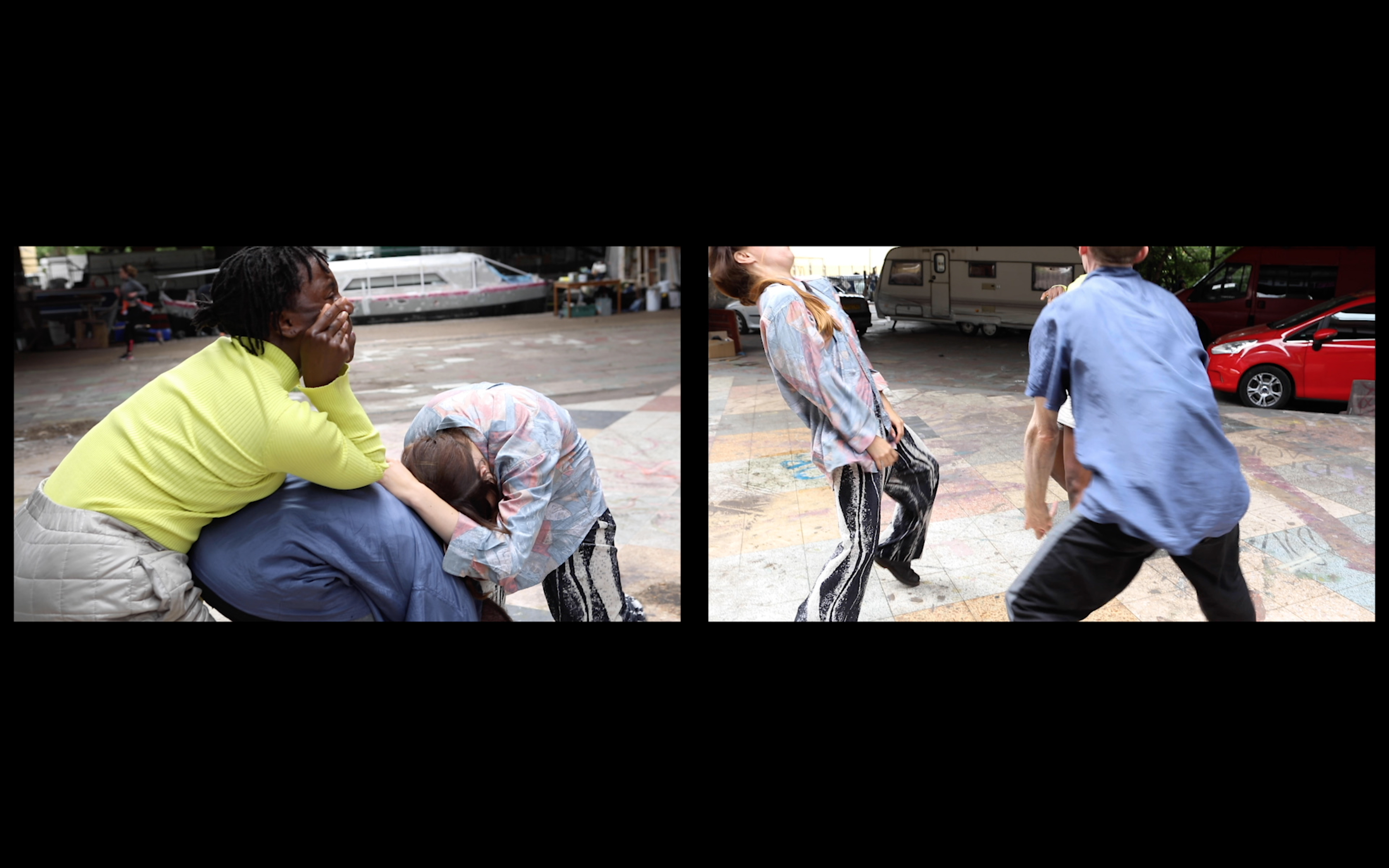 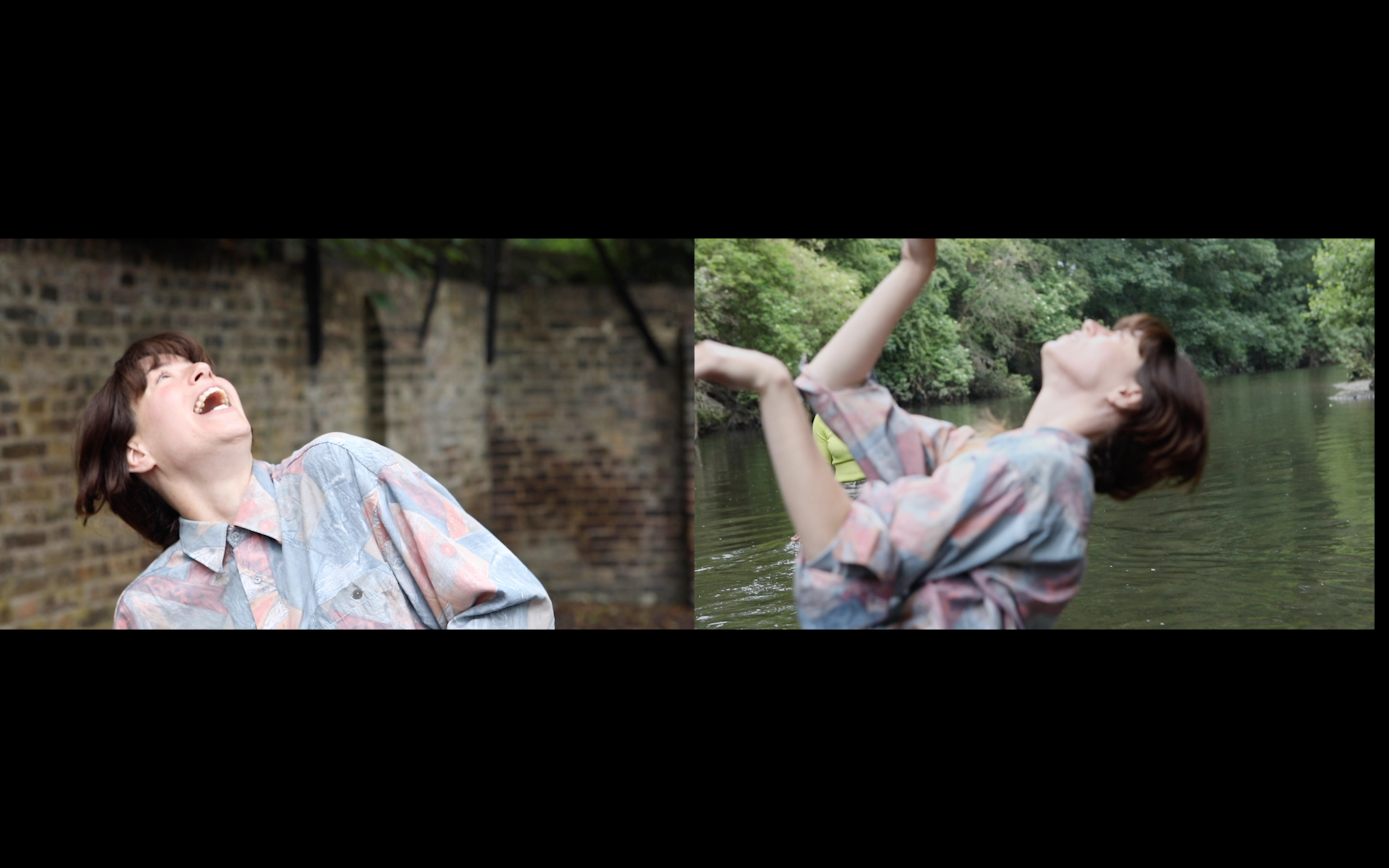 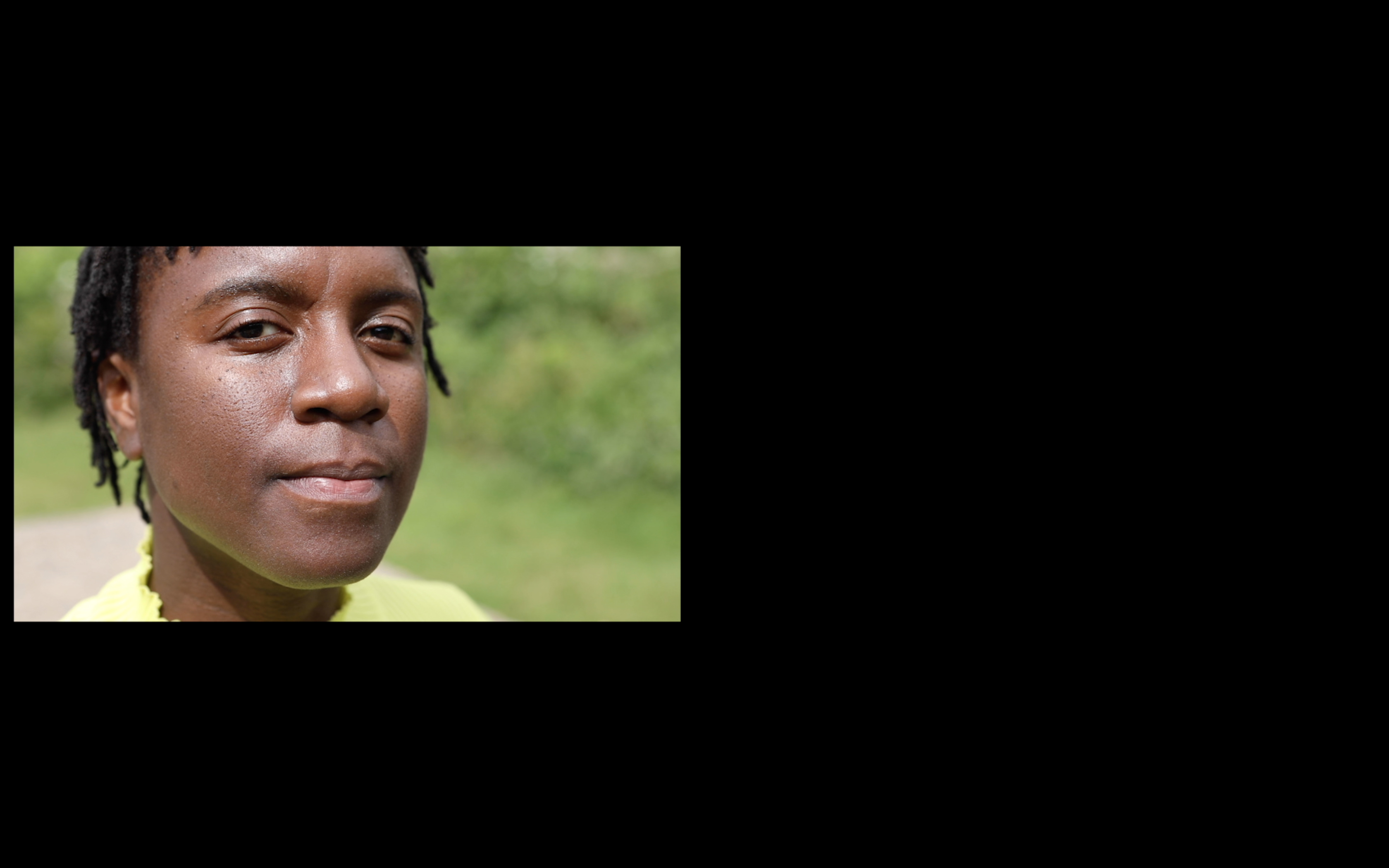