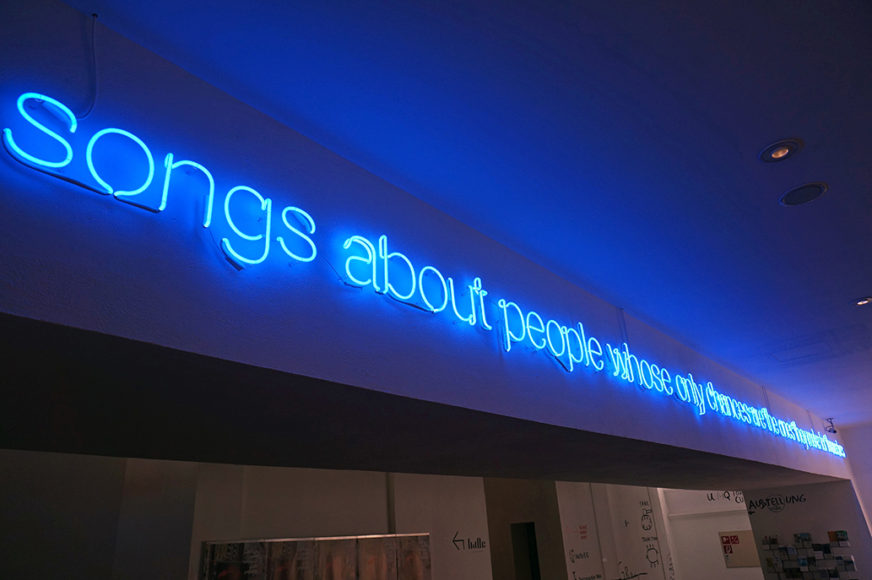 Tim Etchells presents two new neon works 'Chances' (2020) and 'Songs About Being Free' (2020) which appear to announce the title of a category of songs, conjuring up real or imagined songs in the heads of those who encounter it.

"'… of bread, wine, cars, security and peace' examines the notion of the “good life.” At the beginning of the 2000s, Lebanese writer Bilal Khbeiz described the unattainable dream of a “good life” for people in the Global South – in contrast to the Western world – with “bread, wine, cars, security and peace” (Globalization and the Manufacture of Transient Events, Beirut: Ashkal Alwan, 2003).

Almost two decades later, it seems that these basics are escaping more and more people – even those living in places where these things were previously taken for granted. Climate change is putting the continuation of life on earth under question, and as ecological destruction gathers pace, inequality and injustice are growing and faith in the benevolence of capitalism is becoming increasingly broken. This pandemic, which we are experiencing in different ways across the globe, is only one – albeit radical – manifestation of the fragility of our societies, making ever more clear the necessity of building accessible, public systems of social care and engendering a shared responsibility for all.

Through its questioning of the “good life,” the exhibition, which takes place at both venues of Kunsthalle Wien – Museumsquartier and Karlsplatz – suggests alternatives both to the fear of imminent economic and social collapse and to the return to an unsustainable “normality,” which, at present, appear to be the only two choices before us. Critical, constructive, and imaginative artists’ voices act as signals of the possibilities for social change and of new proposals for living together. … of bread, wine, cars, security and peace puts care, solidarity, and a sense of possibility at its center – values that have become significantly more precious to everyone since the exhibition’s premature closure."

View all news
Tim Etchells
Receive updates on exhibitions, shows, events, and artists.
Thank you for subscribing to our mailing list. Please check your emails to confirm.
Something seems to have gone wrong while submitting the form, please try again