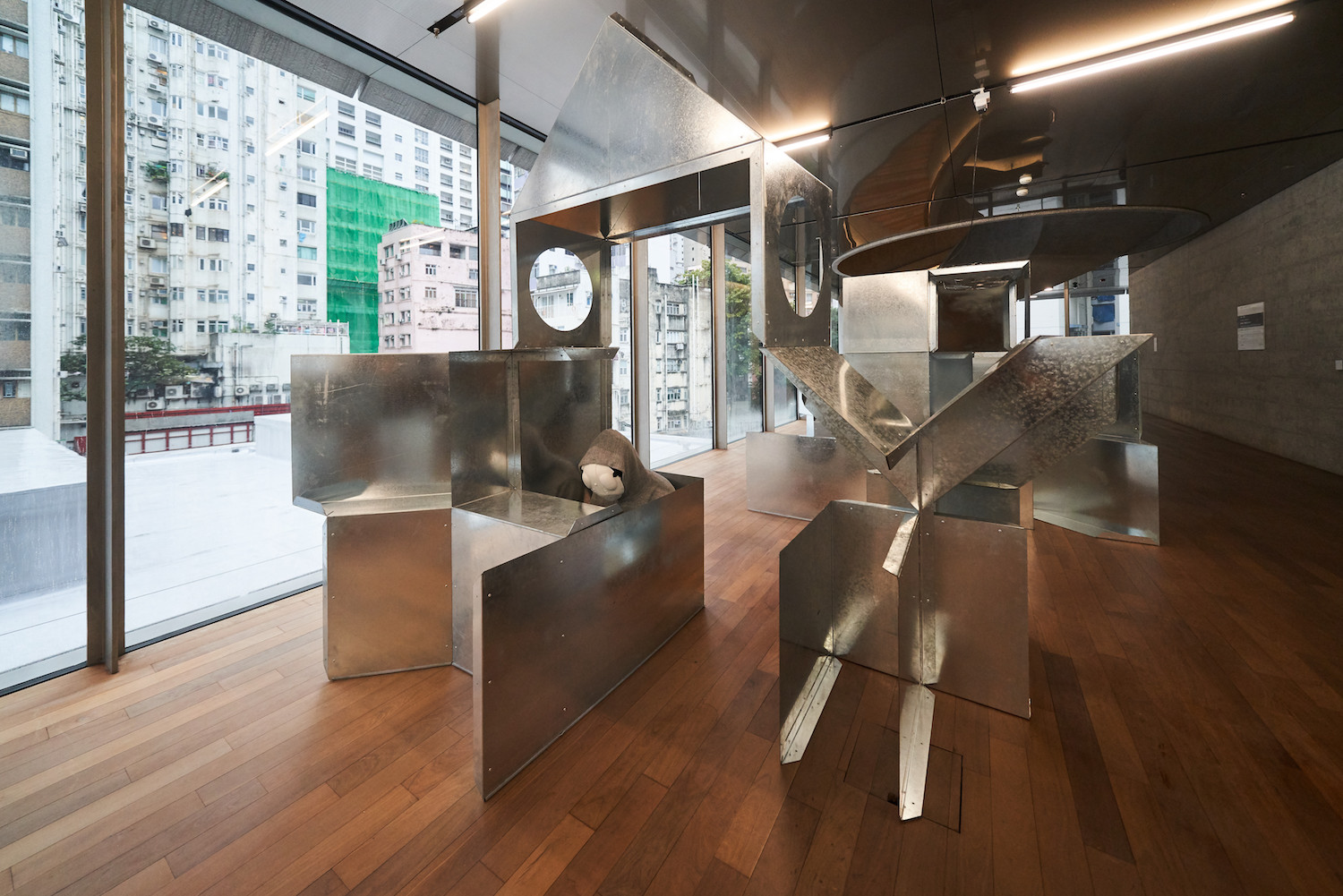 Nadim Abbas was commissioned by Tai Kwun Contemporary to produce 'Fake Present Eons (After Posenenske)', a new mixed media installation with durational performance. "Evoking the panicky architectures of video games like Pacman and first-person shooters, it also takes cues from functional ventilation shafts as well as from the utopian geometric explorations of Charlotte Posenenske, the German minimalist artist who famously abandoned the art world in the wake of the global social movement uprisings of 1968. Evoking Posenenske’s method of producing sculptures that could be endlessly combined and reconfigured, each of Abbas’ modules works towards forming mutant architectural entities, which he likens to newfangled techno-monsters from cyberpunk classics such as Akira (1988) and Tetsuo: The IronMan (1989). Solitary costumed individuals quietly occupy the air-conditioned parameters without any seeming motive, a mask obfuscating their identity. An anagram of “After Posenenske”, 'Fake Present Eons' is a kind of immersive simulation that connects the psychological tensions of cyberpunk’s multiple cultural reference points (from corporate architecture to kitsch video games) through the allegorical medium of contemporary art."

"In 2019, the year of the future in films such as Blade Runner and Akira, we find ourselves stuck in a world where cyberpunk fictions have become a reality: our bodies have merged with our devices; our society is beholden to unchecked corporate greed; our sprawling cities are starkly divided between haves and have-nots. Decades after its emergence as a dystopian vision of the technological future, the distinct visuality of the cyberpunk genre—passionately explored and developed in cinema, video games, manga, animation, and graphic novels at the time—has settled on our present, leaving science fiction in an awkward relationship to the future. Instead of forward-facing narratives, science fiction is dominated by crisis modes and fantasies of perpetual disaster—set not in the far-flung future, but today.

Phantom Plane, Cyberpunk in the Year of the Future examines how the genre’s aesthetics and futurisms have also bled into art and visual culture. The exhibition centres around what the influential science fiction author William Gibson called “the meta-city,” a sprawling urban space just as virtual as it is real. Whether through spectacular panoramas of virtual mega cities, or fleeting snapshots of their alluring underworlds and dissonant denizens, the exhibition explores life in the meta-city, and how the cyber metropolis has transformed from a fantastic metaphor for life in the future into an inescapable, looping present.

In some of the artists’ works on view, the city—as well as its physical bodies and attendant digital spaces—appears as a ghost of past futures. Other works find new ways to proceed, pondering how cities and their inhabitants alike might undergo “fugues of retrofitting”, as Gibson put it, to move decidedly forward in time."

View all news
Nadim Abbas
Receive updates on exhibitions, shows, events, and artists.
Thank you for subscribing to our mailing list. Please check your emails to confirm.
Something seems to have gone wrong while submitting the form, please try again