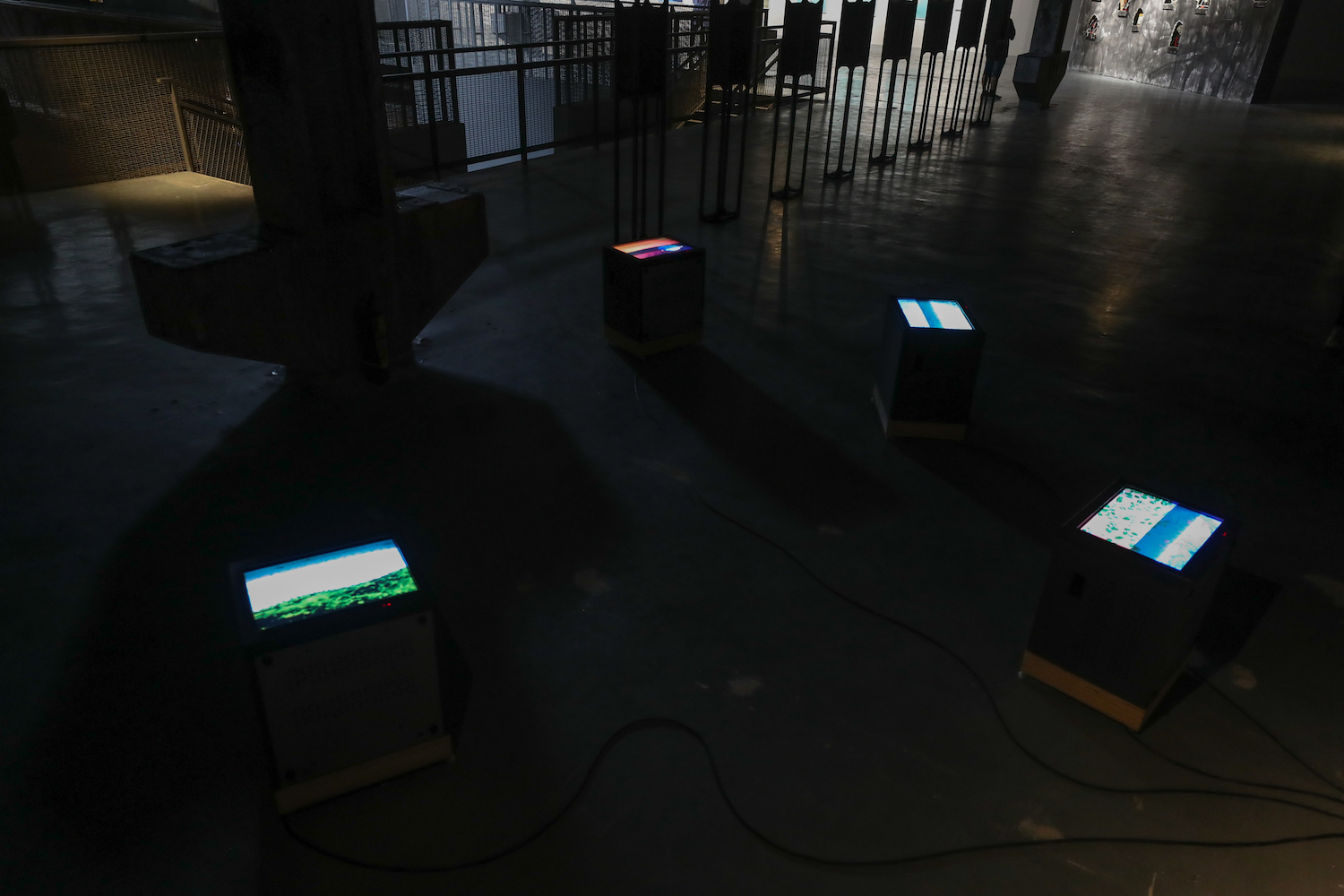 Nadim Abbas presents his video installation 'The Scale of the Universe' (2012) in which 4 GIF animations are played on seperate screens on the floor. The GIF animations are vivid and inverted layers of film superimposed onto each other. The films are made from foods which are animated and edited to look like otherworldly events or molecular movements of cells.

"A woman bursts into a state of frenzied dance on the street. Within the next month, four hundred more follow. This mass hysteria, which engulfed Medieval Europe between the 13th and 17th centuries, was later named Dancing Mania or the Dancing Plague. In the centuries when it was prevalent, this “popular art”—dancing—took on the appearance of a contagious disease, liable to spread, lethally, through mimetic acts—in paroxysms that erupted without warning, only to vanish as mysteriously as their origins. Such strange tales of mass hysteria as contagious disease throughout history have led to scholarly investigations as to what “lay behind”—the unconscious, that fertile ground for psychoanalysis. Carl Jung developed his theories based on primal psychological mechanisms found in anthropological texts: people develop spiritual connections to objects in the natural world; these early figures become archetypes for the collective unconscious. This collective unconscious, in turn, arouses an unconscious identification that can induce a state of participation mystique.

Participation Mystique attempts to stir up a complex, unsettling atmosphere between the exhibition space and the viewer, the stimuli and their recipient. As with the experience of transference between therapist and patient, whereby both parties are temporarily fused in a phantasmagoric atmosphere resulting from the projective identification, the audience enters Ming Contemporary Art Museum—housed in a former paper machine factory—can also find themselves in an unconscious conjunction with the exhibition. Participation Mystique features fourteen artists with their respective projection of an imagined self onto a lack. Such imagination often bespeaks deep, painful misconceptions, akin to phantom limb pain, or triggers strange and mesmerising pareidolia; the desires it reflects serve as the pathways for transference between work and audience. Here, dream and memory replace the mirror to become the medium of desire, while their narratives—meshworks of the fictitious and the real, the fantastic and the authentic—restage and allude to the absence of desire. This is intention infinitely approaching, without ever touching, its object-cause.

One might find a possible explanation of mass hysteria in René Girard’s analysis of mimetic crisis. According to Girard’s influential theory, rivalry and conflict arise precisely from the diminishing distance between the subject and the mediator of desire. In this structure of desire, mimesis triggers a series of actions, forming two vectors, approaching one another asymptotically: on the one hand, closeness, attachment and adoration; and, on the other, empathy to the point of vicarious trauma. The exhibition seeks to reproduce these intensifying affective linkages, allowing them to rise and clash with one another through the works on display, thereby illuminating various, drifting forms of desire.

Today, our reservoir of desire is not simply the unconscious mind. Participation Mystique situates itself within this reconfiguration of desire. In this immense mirage of their making, the artists use various sensory perceptions to tease out our desire, allowing us to be in touch with the pain and excitement of loss, accident, damage and violence, thereby recognising the profound spiritual ties between us and the world."

View all news
Nadim Abbas
Receive updates on exhibitions, shows, events, and artists.
Thank you for subscribing to our mailing list. Please check your emails to confirm.
Something seems to have gone wrong while submitting the form, please try again