Ludovica Gioscia creates one of her decollage installations in which layers of custom and found wallpapers are installed and then ripped down revealing the strata underneath. Simultaneously operating on the architecture and importing into the space a pattern that often functions like an infinitely repeated iconic logo, the installation works with the unusual quality of the gallery being primarily wall space. 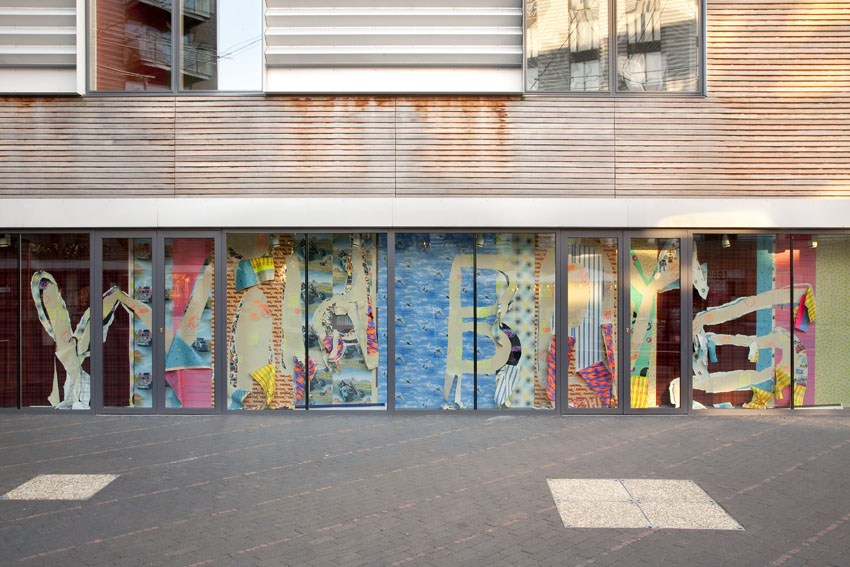 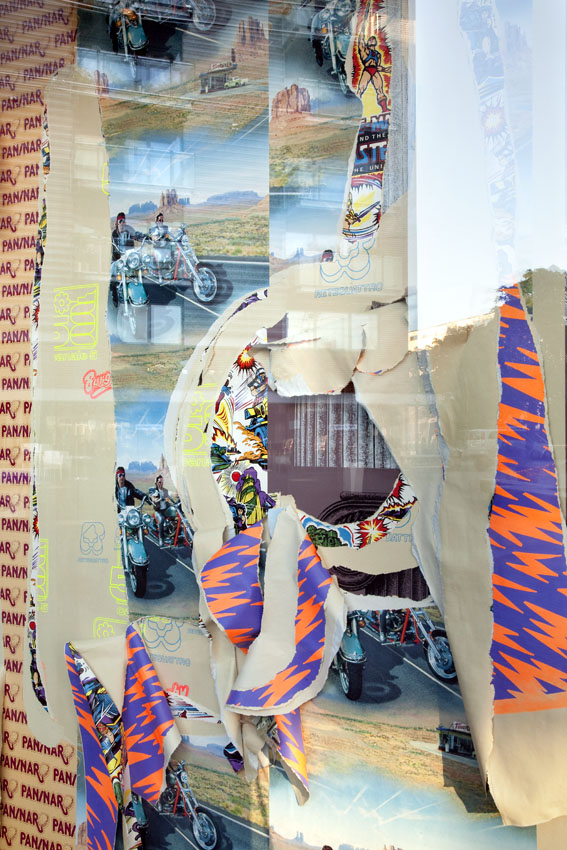 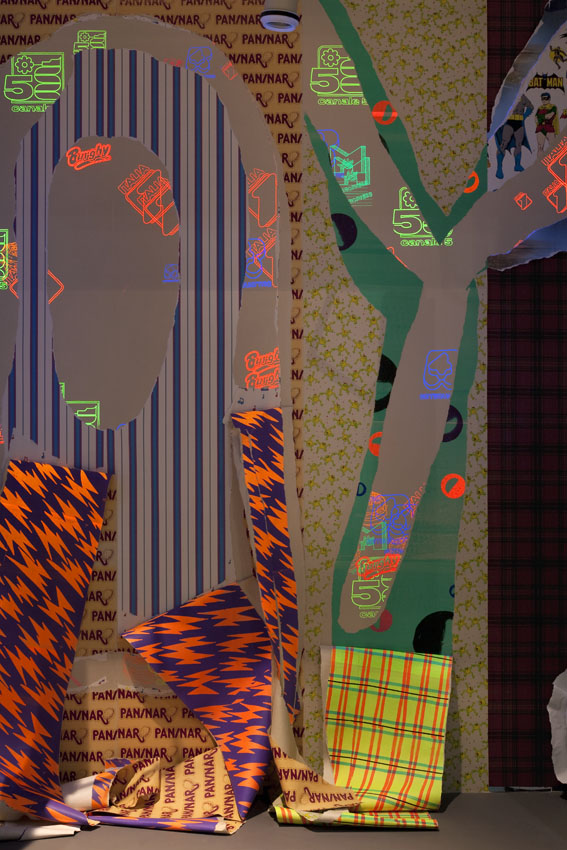 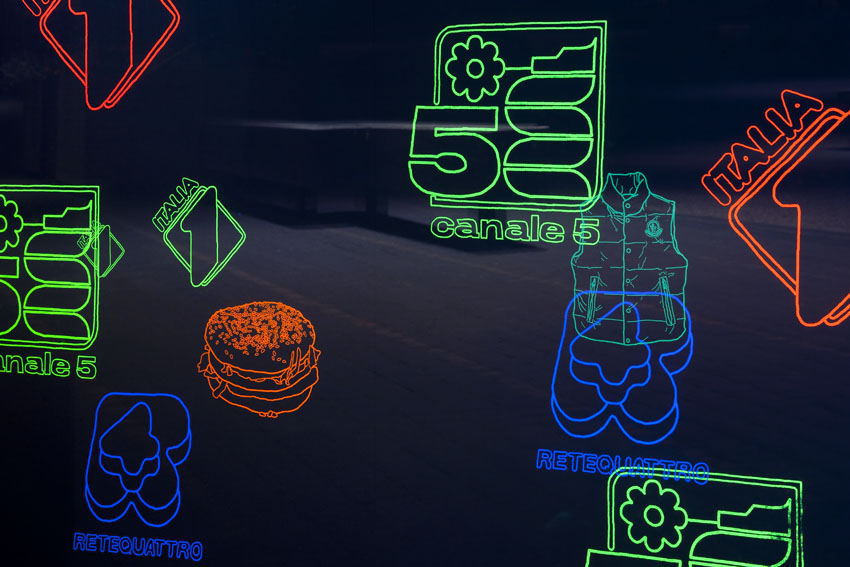 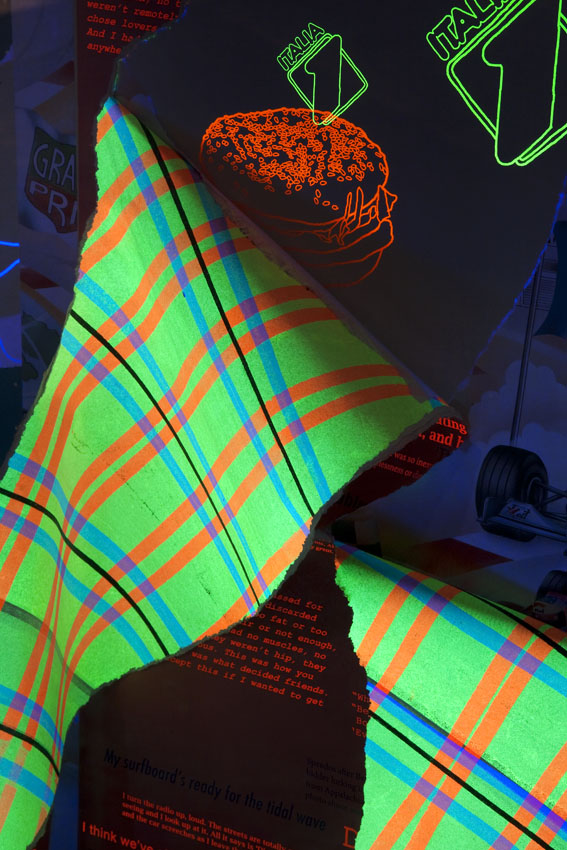 Motifs within some of Gioscia's best-known installations range from baroque church plans to the jumeraiah palm tree icons. They disclose a cacophonic and bombastic collision of bootlegged patterns and eye watering colour schemes that are underpinned by a dark humour to emphasise the role of leisure and opulence that has been employed as a simulacra for value throughout culture.

For this installation Gioscia explores the ‘Paninaro’ culture, which underpins much of her current practice. ‘Paninaro’ is a fashion phenomenon that took hold of Milan in the 1980s and gradually spread across Italy. The Pet Shop Boys wrote a song about it when visiting Milan in ‘86, which is how the term found its way into our dictionaries. The Paninaros (the name given to people who took on this cultural identity) are symbolic of a decade of intense hedonism and they are the first fetishists of overall brand consumption. The actual word ‘paninaro’ means ‘consumer of sandwiches’ and the hamburger became one of their strongest logos. They were obsessed with everything American. Paninaros were a dream for the marketing world as they were extremely legible as a teen subculture and very predictable in their consumptions. Brands like Naj-Oleari exploited this by creating a ‘wallpaper-like-environment’ for them where everything matched: from make-up palettes to bags to socks to hair-bands to diaries to pencils to bed linen.

Berlusconi’s media empire was gaining its strength in those years, with channels Italiauno, Canalecinque and Retequattro. They all broadcast imported american programes such as Dallas and had a variety of extravaganza shows, such as Drive-In. The latter was filmed in an american drive-in style set, which inculded a fast food restaurant and one of the main characters, ‘Il Paninaro’, played by comedian Enzo Braschi, dictated the look and interests of the paninaros.

For the site-specific Vitrine installation Gioscia will engage with icons of the Paninaro history, and the giant decollage will have two modes: a diurnal one during the day - lit by natural light - and a blacklight lit one at night, which will ignite the fluorescent screenprinted wallpapers referencing Italiauno and the other channels into an ‘active TV’ mode.

‘The better you look, baby, the more you see’ - Glamorama (Bret Easton Ellis)

Vitrine hosts a special Paninaro event to accompany ‘Soft Power’, with a Private View, talk, fashion and music in Shortwave Cinema opposite the gallery on Friday 8 October from 6 til 12pm. There will be copies of the ‘Paninaro dictionary’ compiled by Barbara Pansadoro available during the opening.