Header Stretcher Soldier Sailor Shiner Rowlock forms the latest chapter in Laura Wilson’s continuing research into bricks around the world. Her site-specific installation engages with the architectural history of Bermondsey and the unique exhibiting conditions of Vitrine. 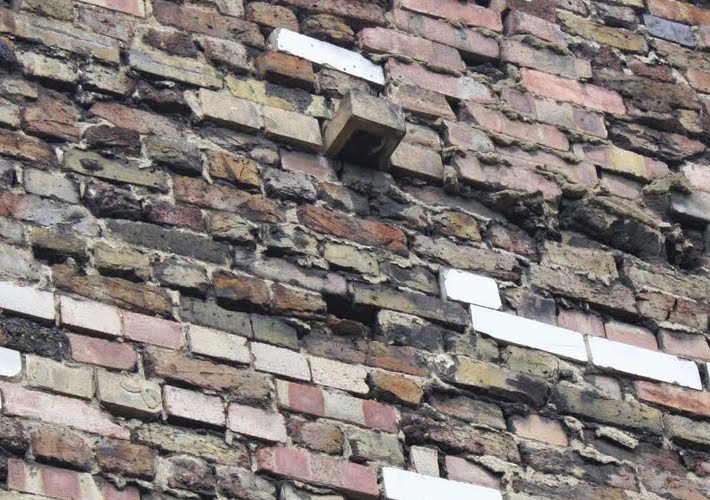 Built behind glass, Wilson’s human-scale brick structures respond to the bricked-up windows of many local buildings. This phenomenon, still to be seen in old houses across the country, is the result of the Window Tax introduced by William III in 1696 to raise funds for his wars in Ireland and overseas. This unpopular law, viewed as a tax on light and air, lasted for 150 years and resulted in the bricking-up of windows to avoid taxation. The exhibition title refers to the six possible orientations of a brick within a wall.Wilson uses bricks from a local factory that have been rejected because they do not meet brick specifications and cannot be sold. In this country brick sizes were standardised during the reign of George III, when bricks were taxed to fund wars in America. These historical taxes on bricks and windows resonate with contemporary revisions of the tax and benefit systems. Layers of Bermondsey’s history permeate Wilson’s installation. The foundations of a medieval abbey lie beneath the modern developments of Bermondsey Square. In the eighteenth century the area was a spa town and by the nineteenth century it was an industrial centre with tanning and leather works, and factories to process food unloaded at the wharves. Its notorious slums featured in Charles Dickens’s Oliver Twist but now its warehouses are flats, restaurants, bars and museums.