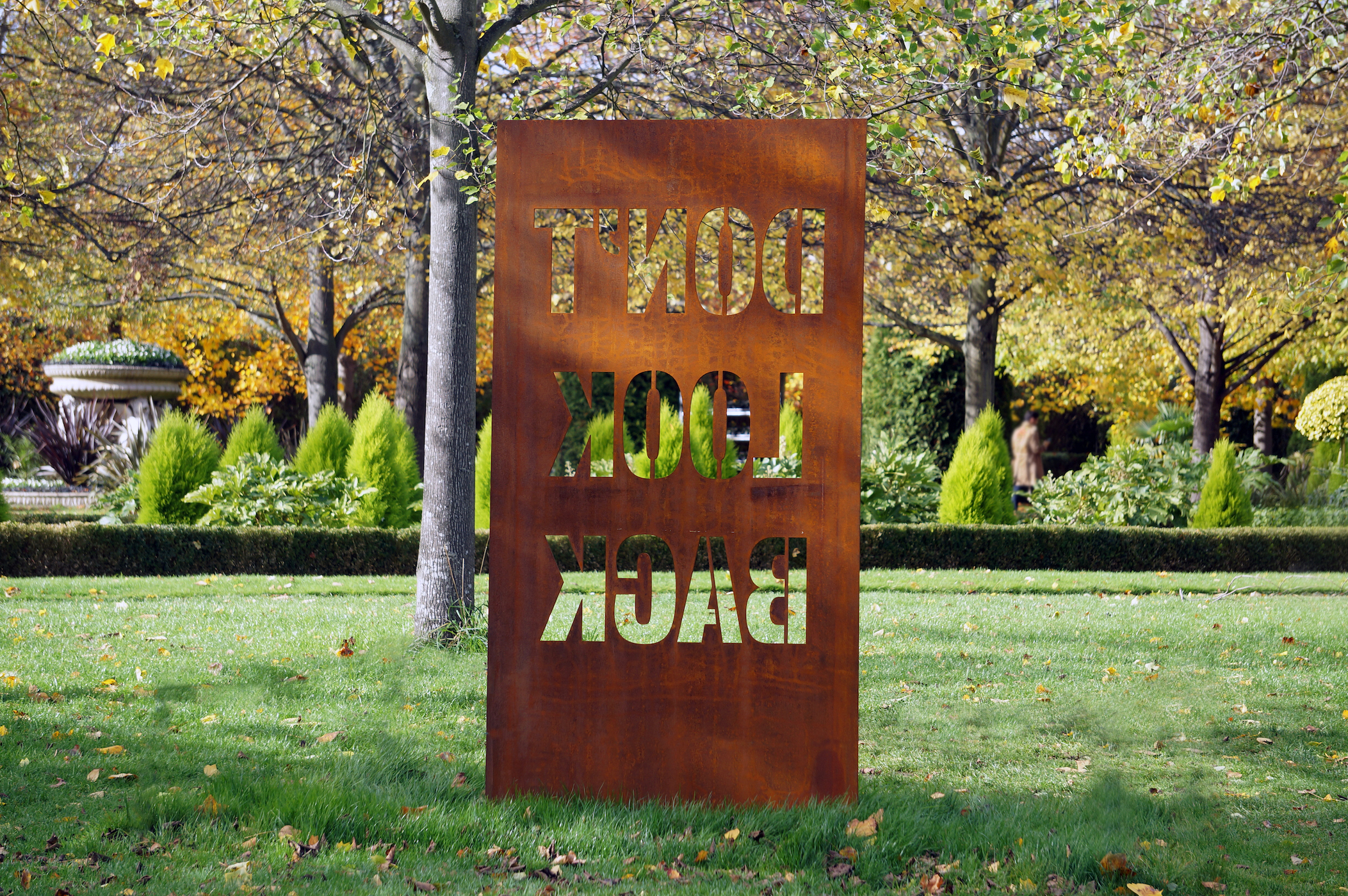 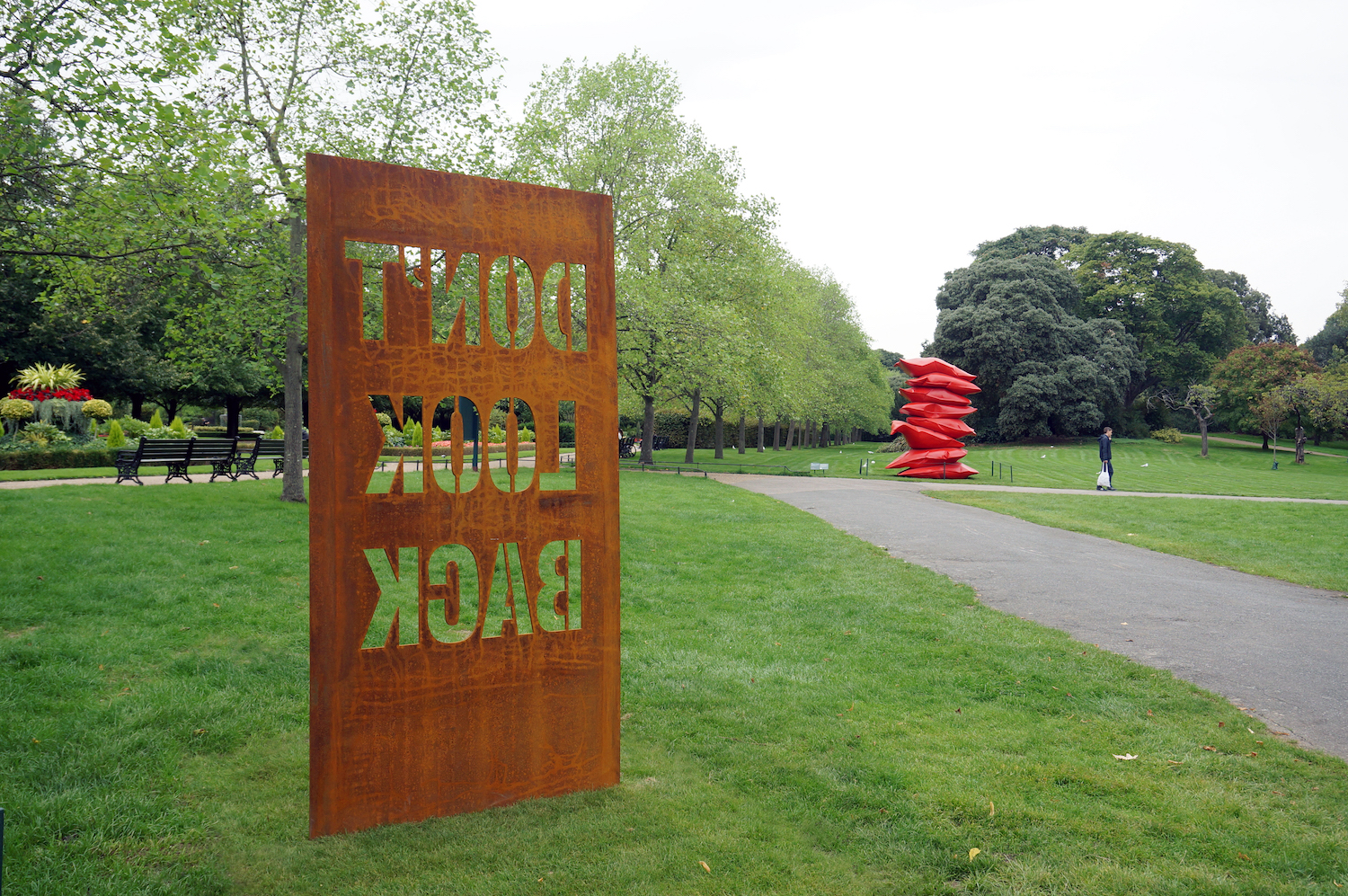 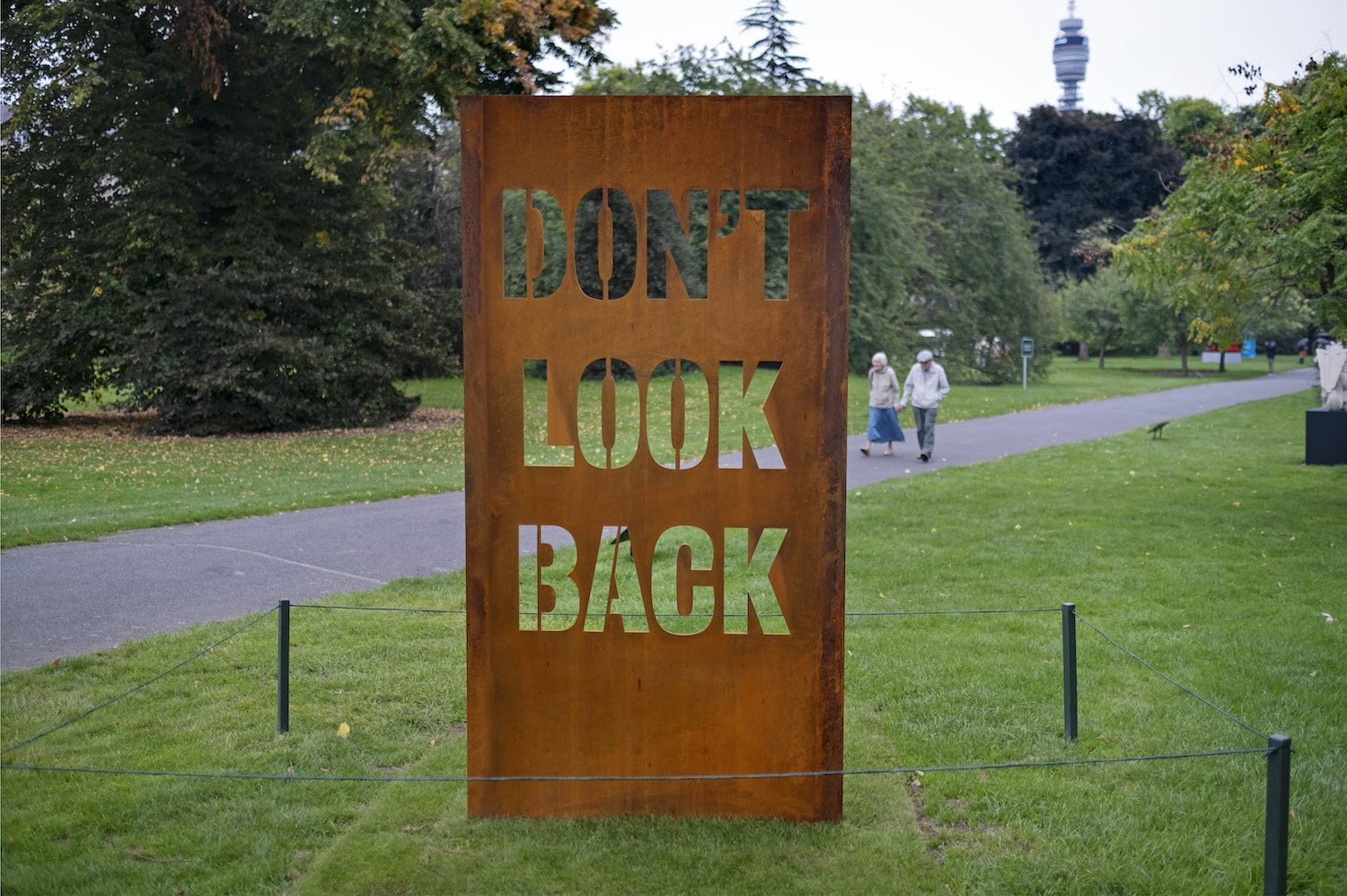 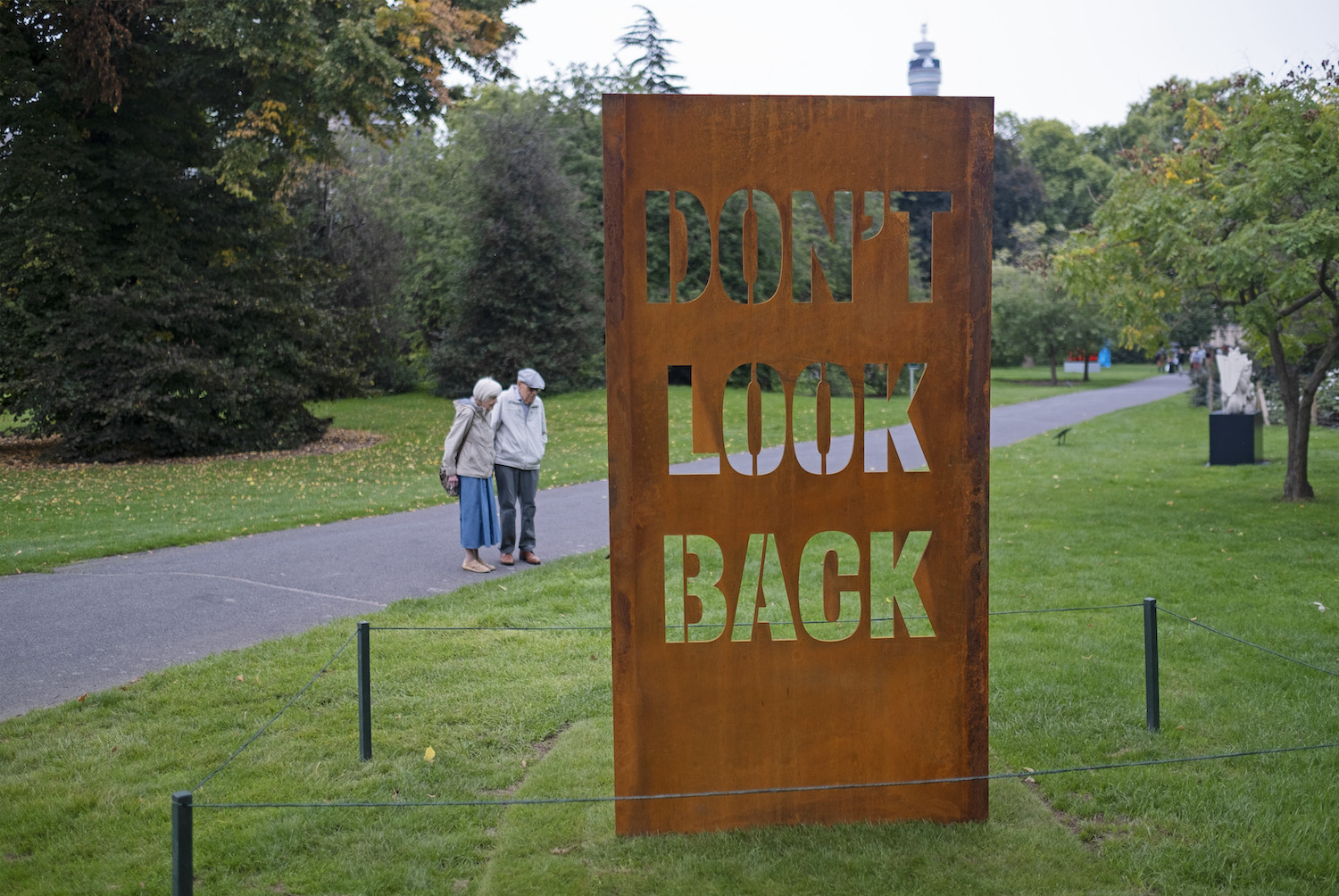 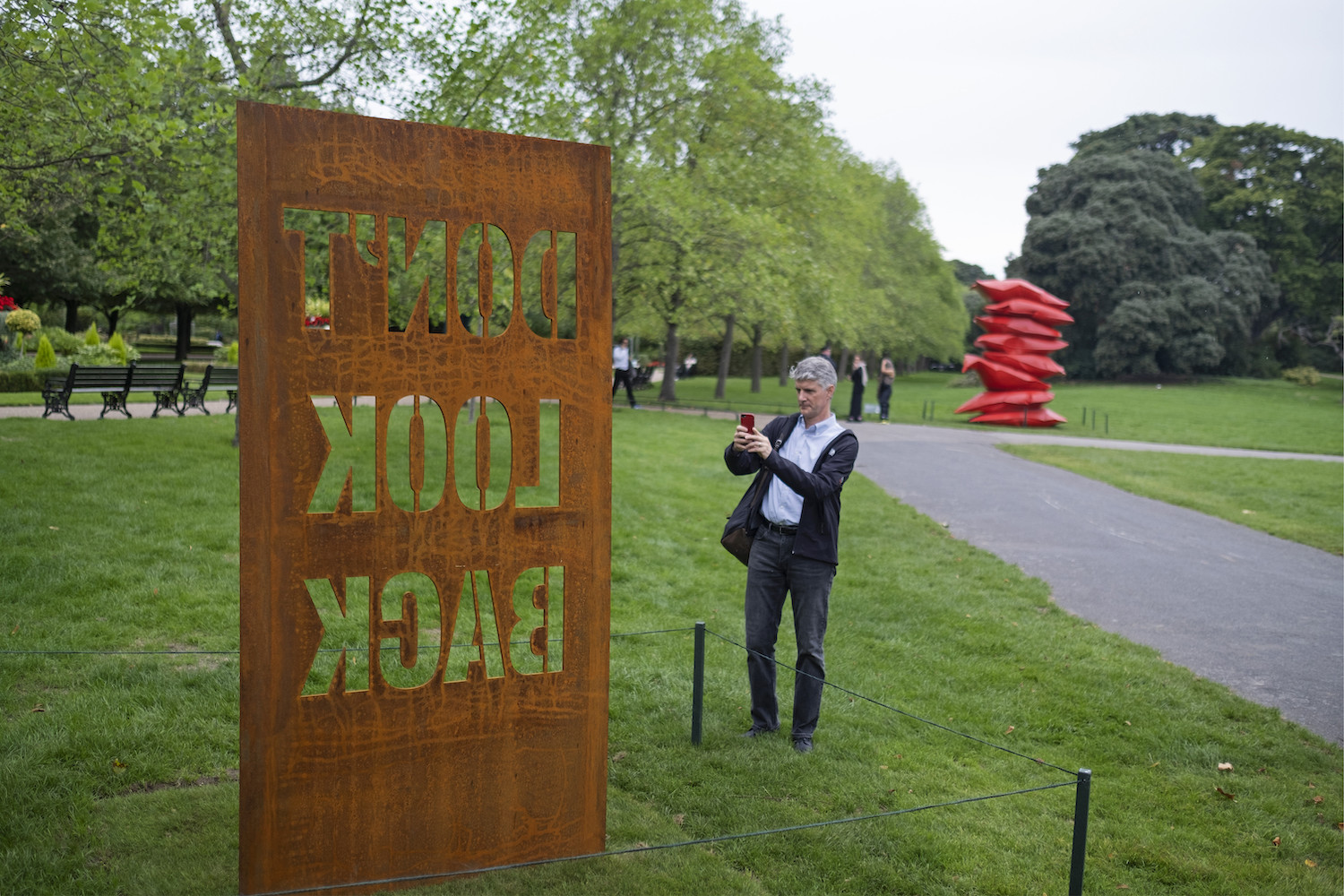 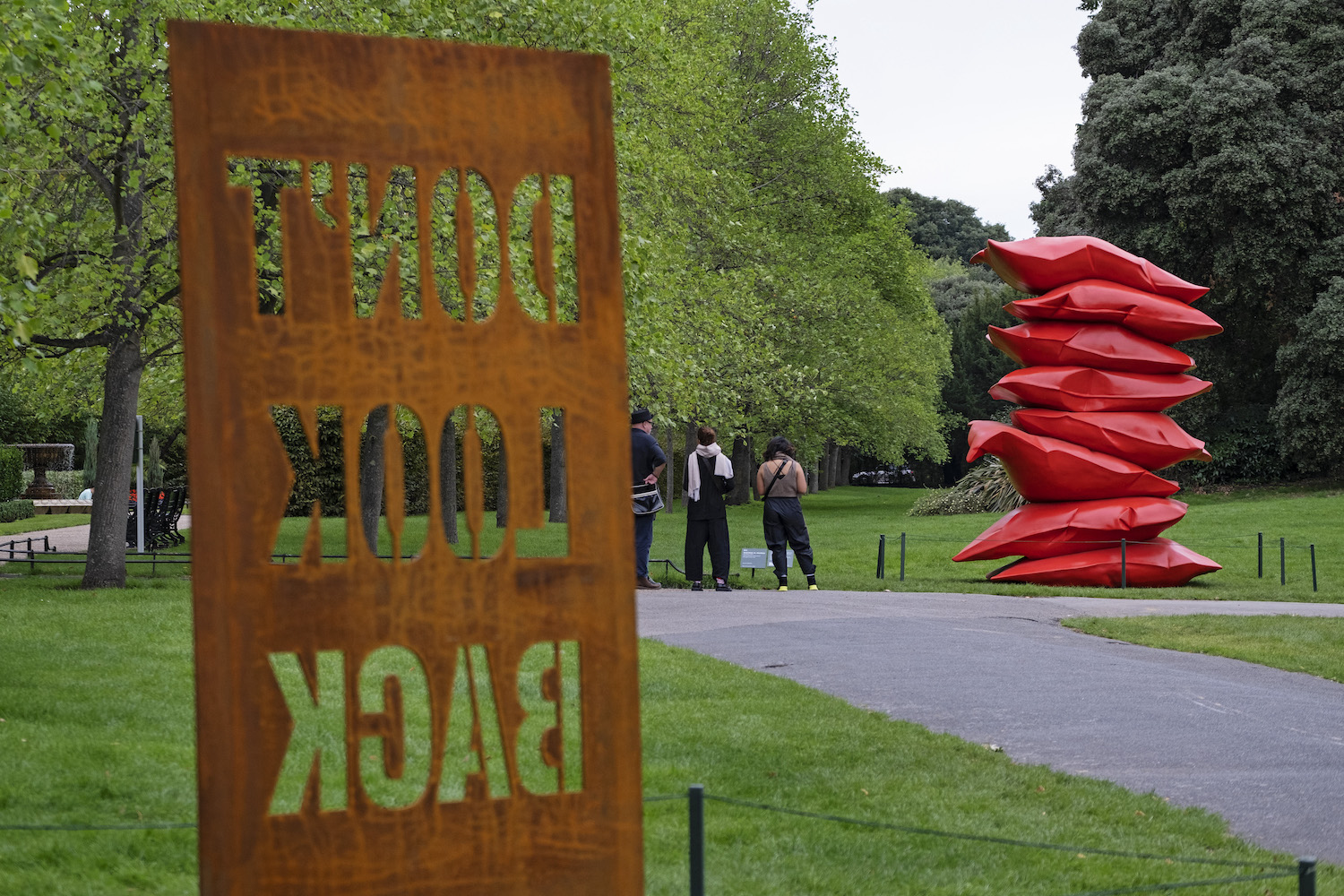 'Don’t Look Back' is an imposing new sculptural work for public space.The work is composed of a single sheet of 12mm weathering steel into which stencil-like letter forms have been cut. As is often the case in Etchells’ practice, the piece takes a simple idiomatic phrase and asks us to think about it afresh in dialogue with context and landscape.

Developing Etchells’ ongoing exploration of the relation between the semantic content of texts and their material form as sculptural objects, the piece is installed in such a way that the viewer is led first to a view of its back side, the reverse perspective on the letters creating a direct conflict with the instruction given by the text. The hollow letter forms - negative space in the single steel sheet - lend the work a porousness and offer a complex interaction between the viewer and the environment, which is glimpsed through and framed by the work itself.

'Don’t Look Back' finds a provocative, playful resonance in the shifting economic, and social landscape of post-Brexit, mid-pandemic UK. Whilst it serves in one sense as a warning about the dangers of dwelling too much on the past, the reverse view privileged by its installation already places and effectively traps us behind, looking back from a distant perspective.

Etchells has concurrently led the performance group Forced Entertainment, based in Sheffield since its inception in 1984. Forced Entertainment are widely considered to be one of the greatest British theatrical exports of the past 30 years, credited with producing some of the most innovative and challenging theatre of the era to great acclaim throughout the world. In 2016, Etchells was awarded the Spalding Gray Award well as the International Ibsen Award for his work with Forced Entertainment.

No items found.
Fair
Receive updates on exhibitions, shows, events, and artists.
Thank you for subscribing to our mailing list. Please check your emails to confirm.
Something seems to have gone wrong while submitting the form, please try again