Established British artist Tim Etchells third solo exhibition with the gallery. Taking cues from its position in a busy public square, Etchells fills the gallery space with a 12 metre-long neon piece that reads ‘For everything that is shown something is hidden’. The letters spelling out the phrase are alternately illuminated, disrupting the text so that it is only partially visible on first sight. 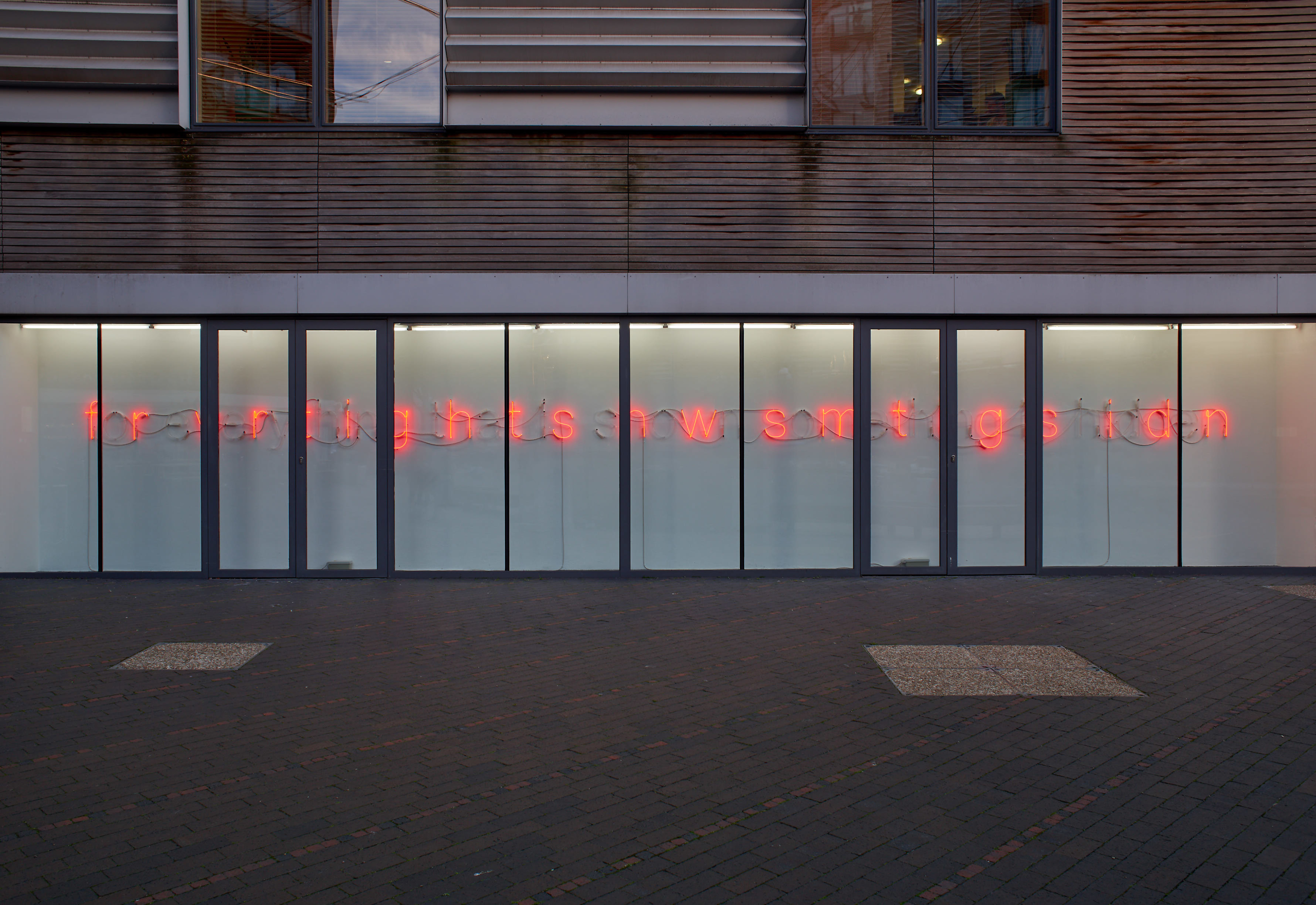 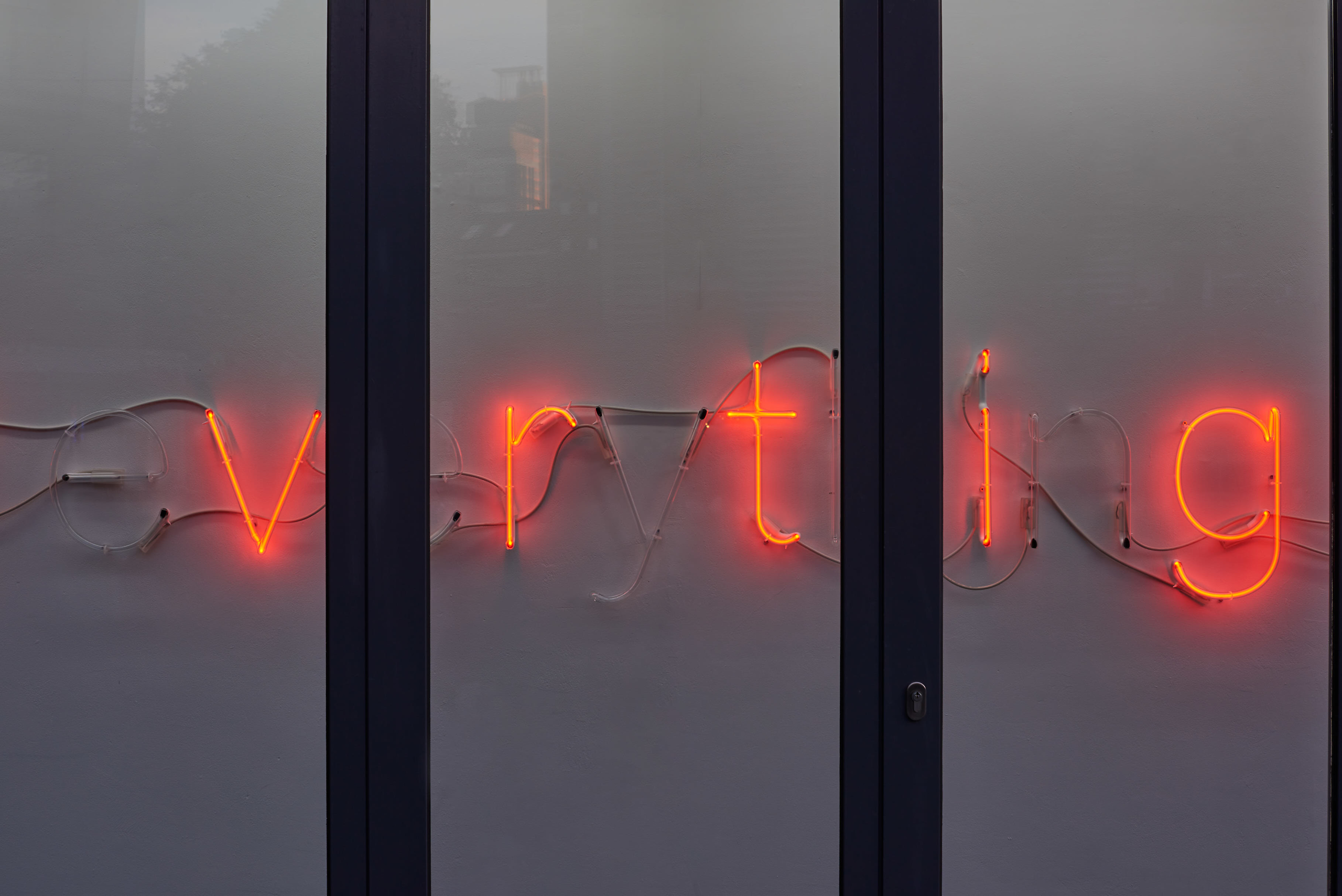 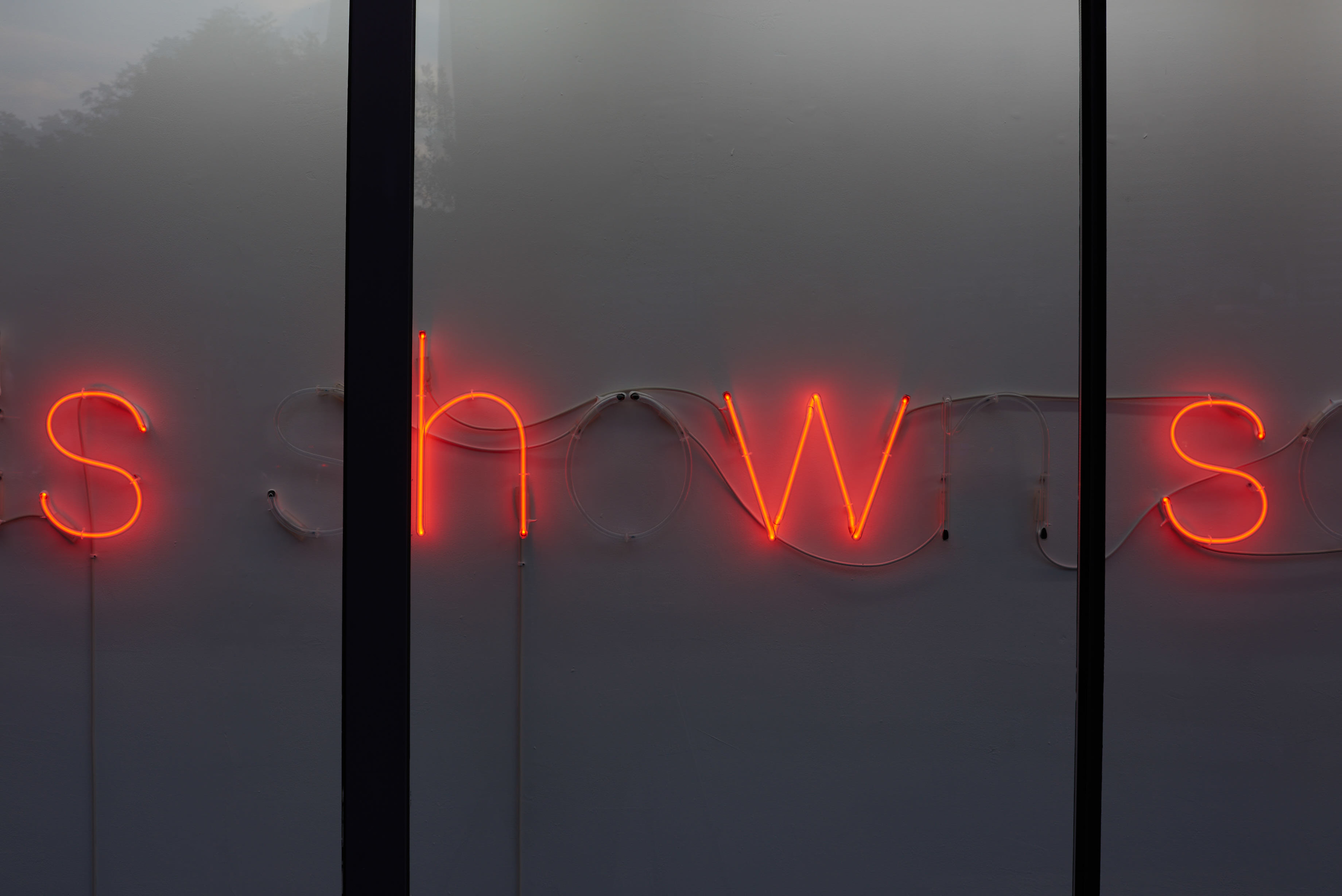 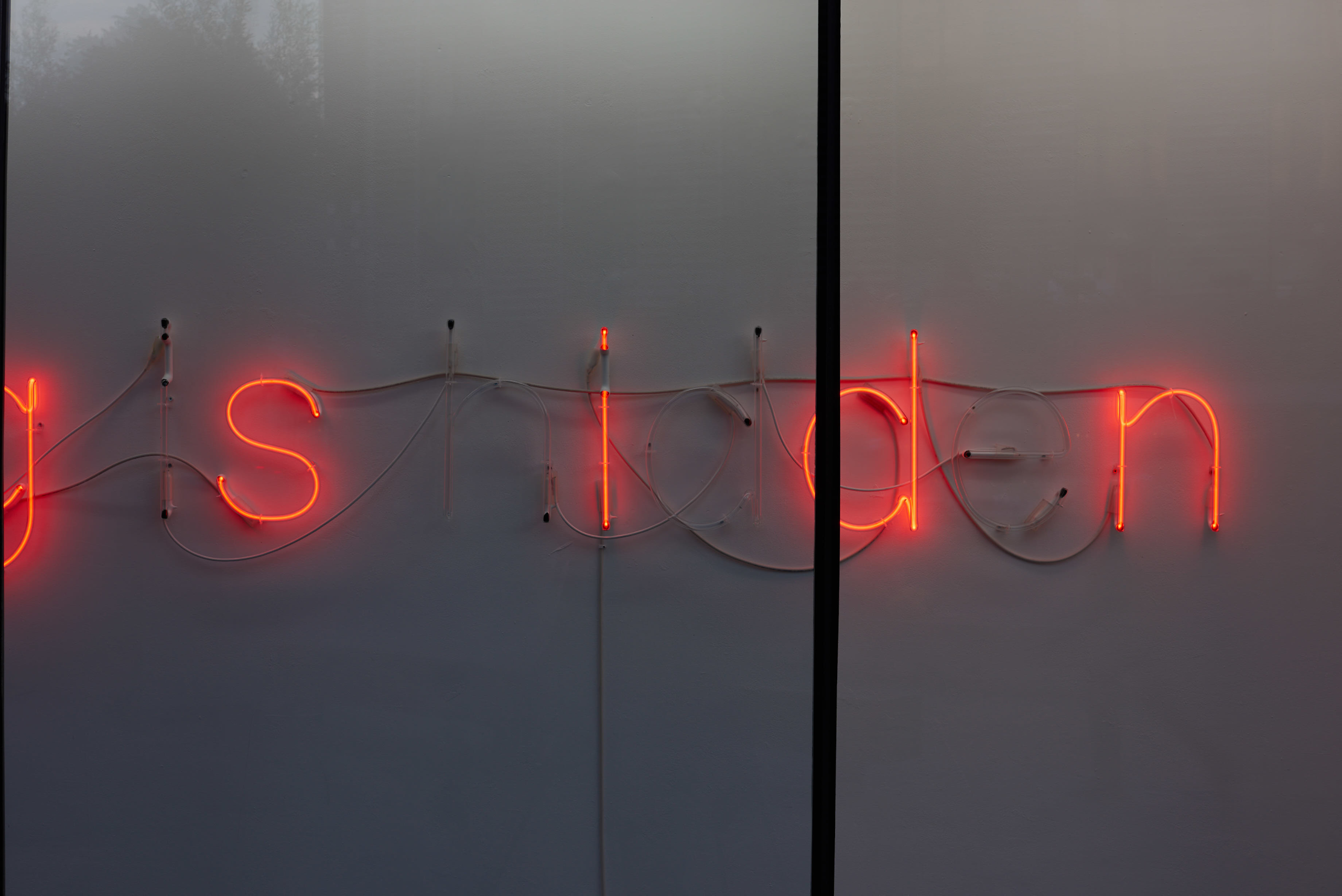 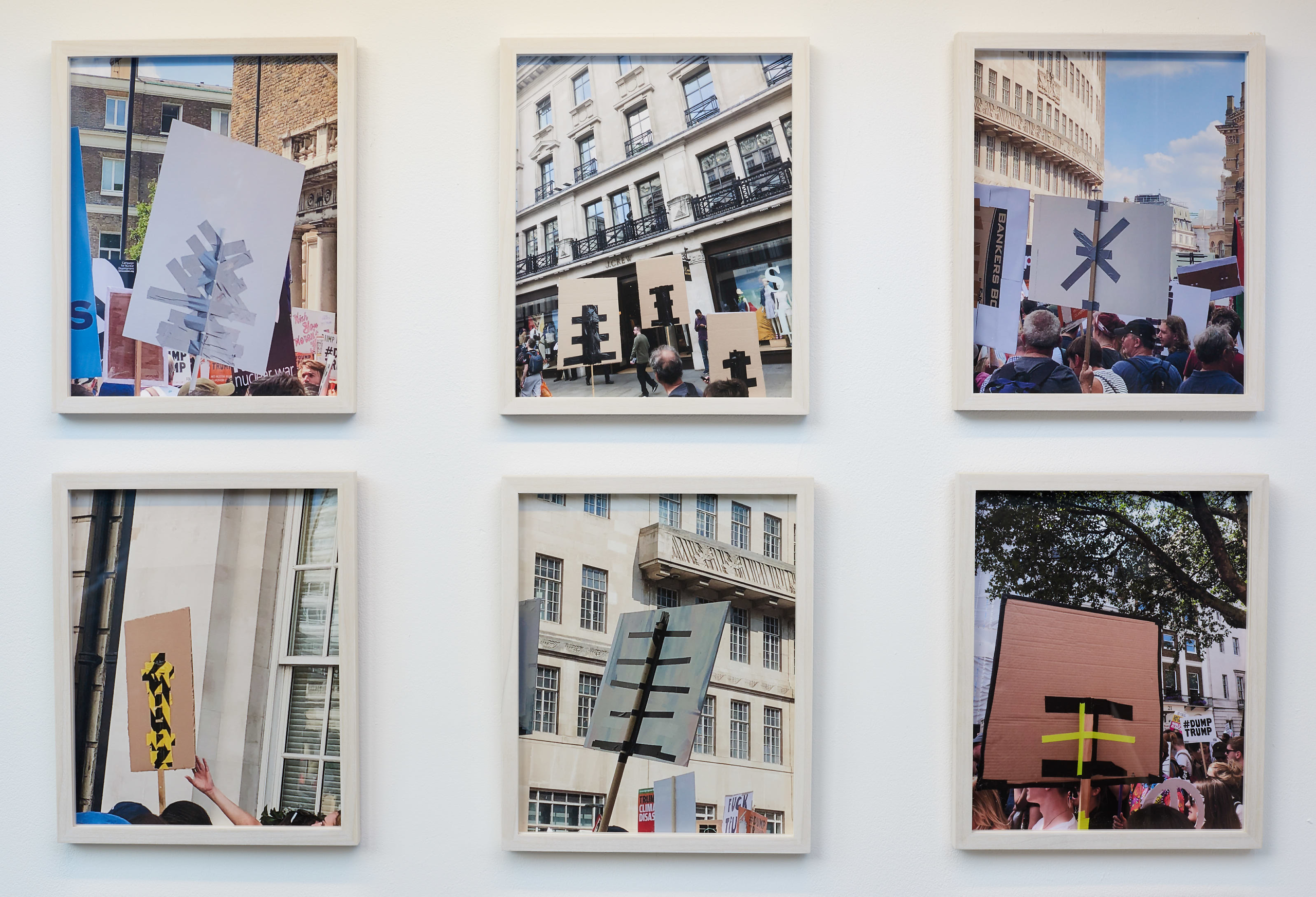 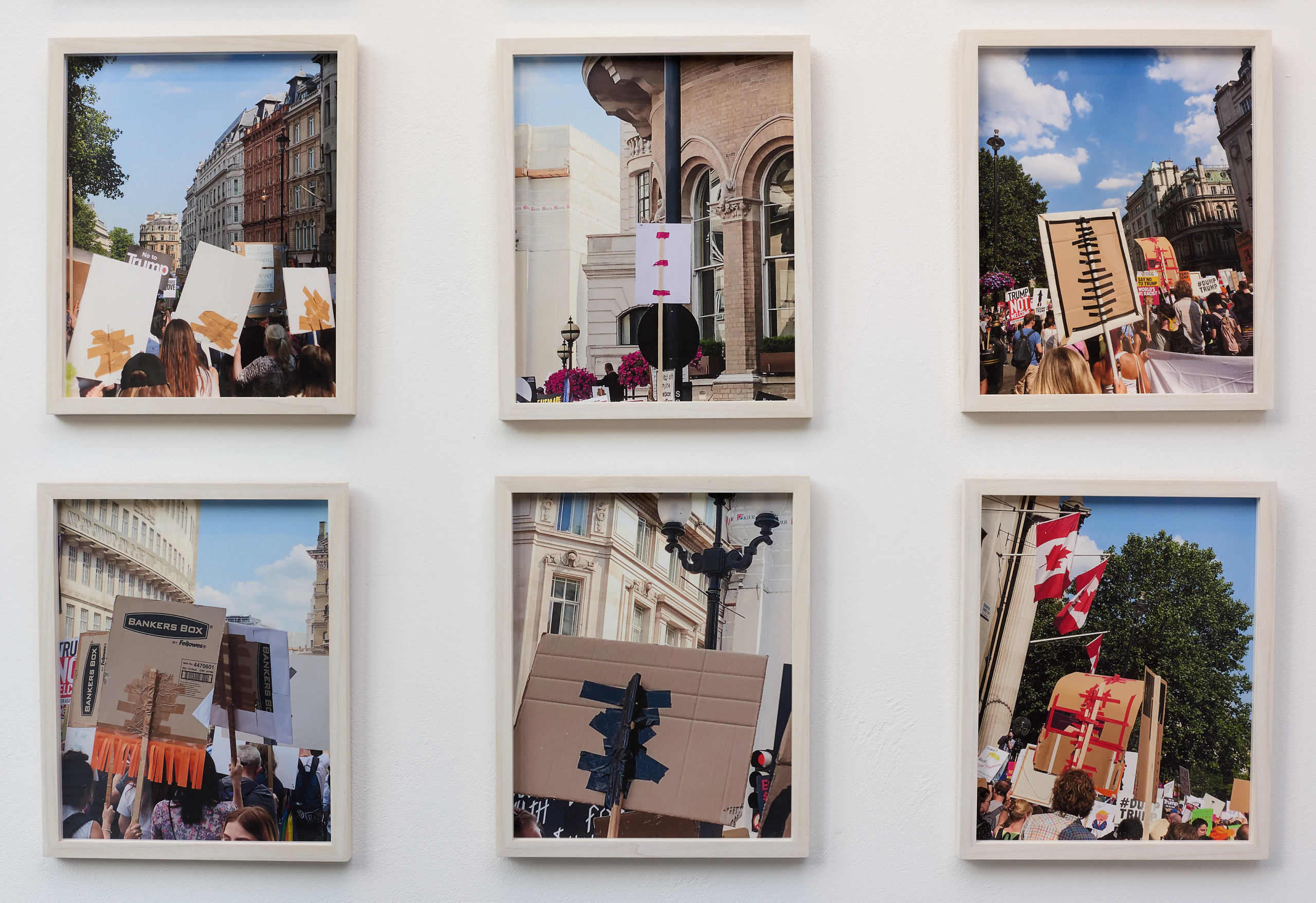 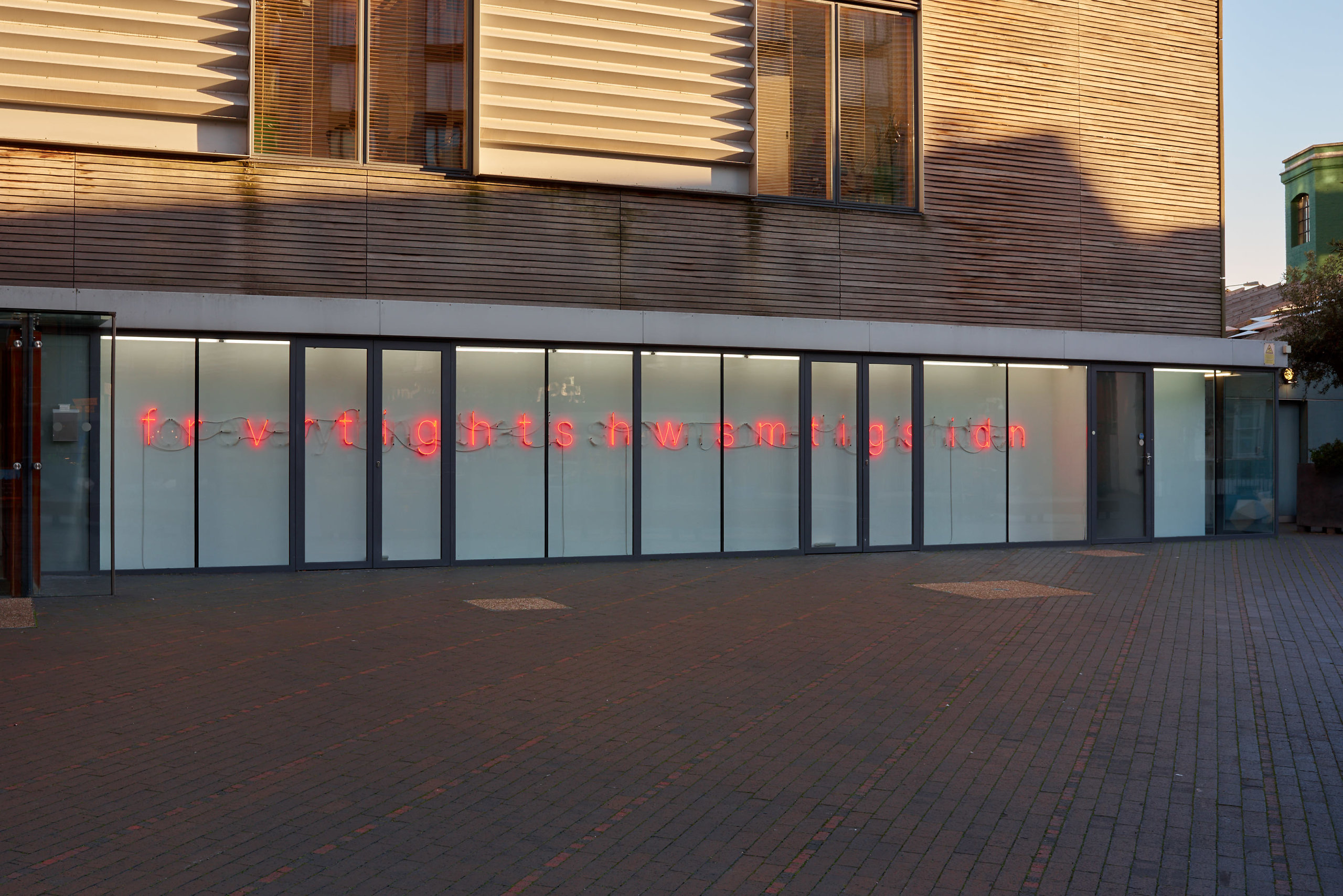 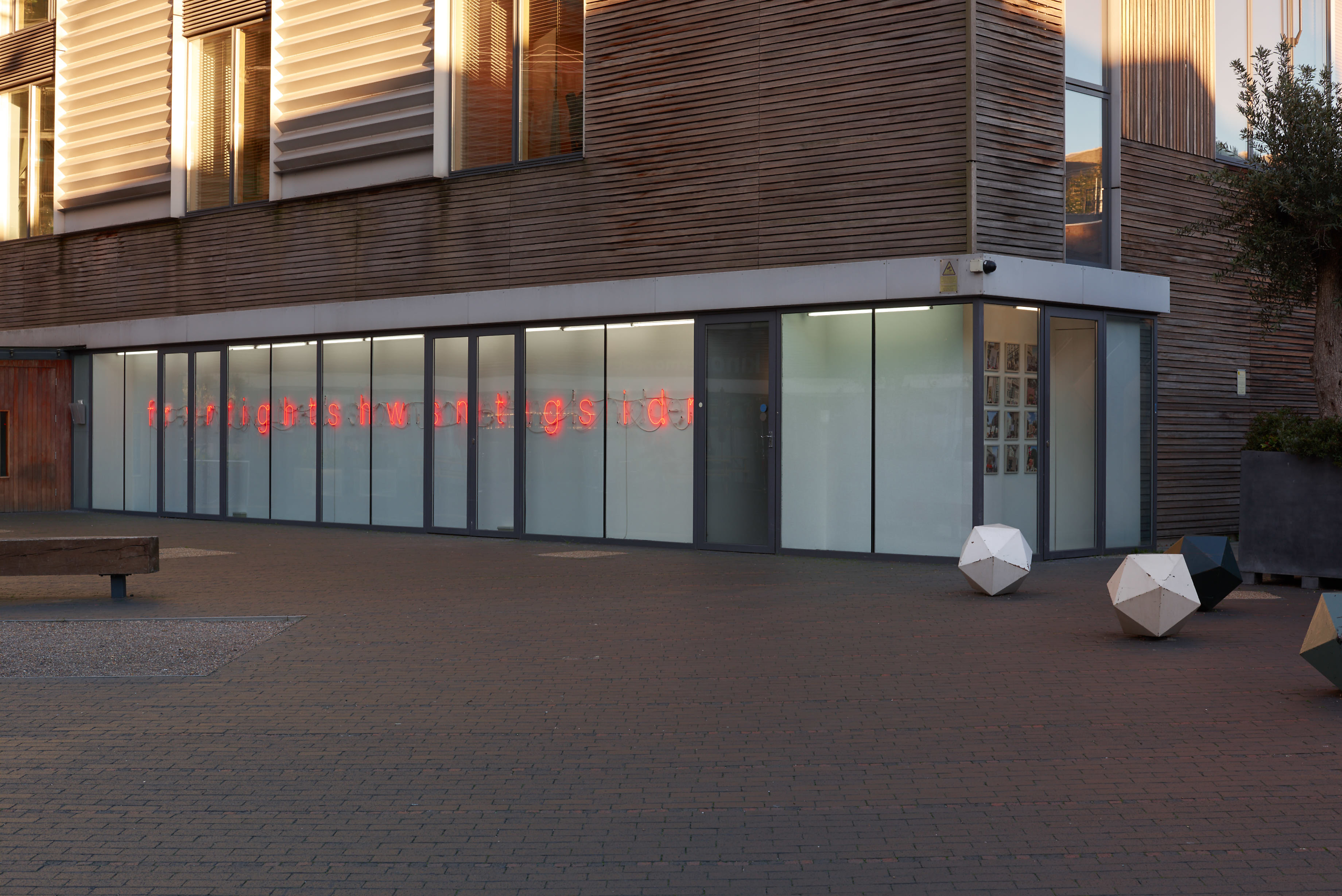 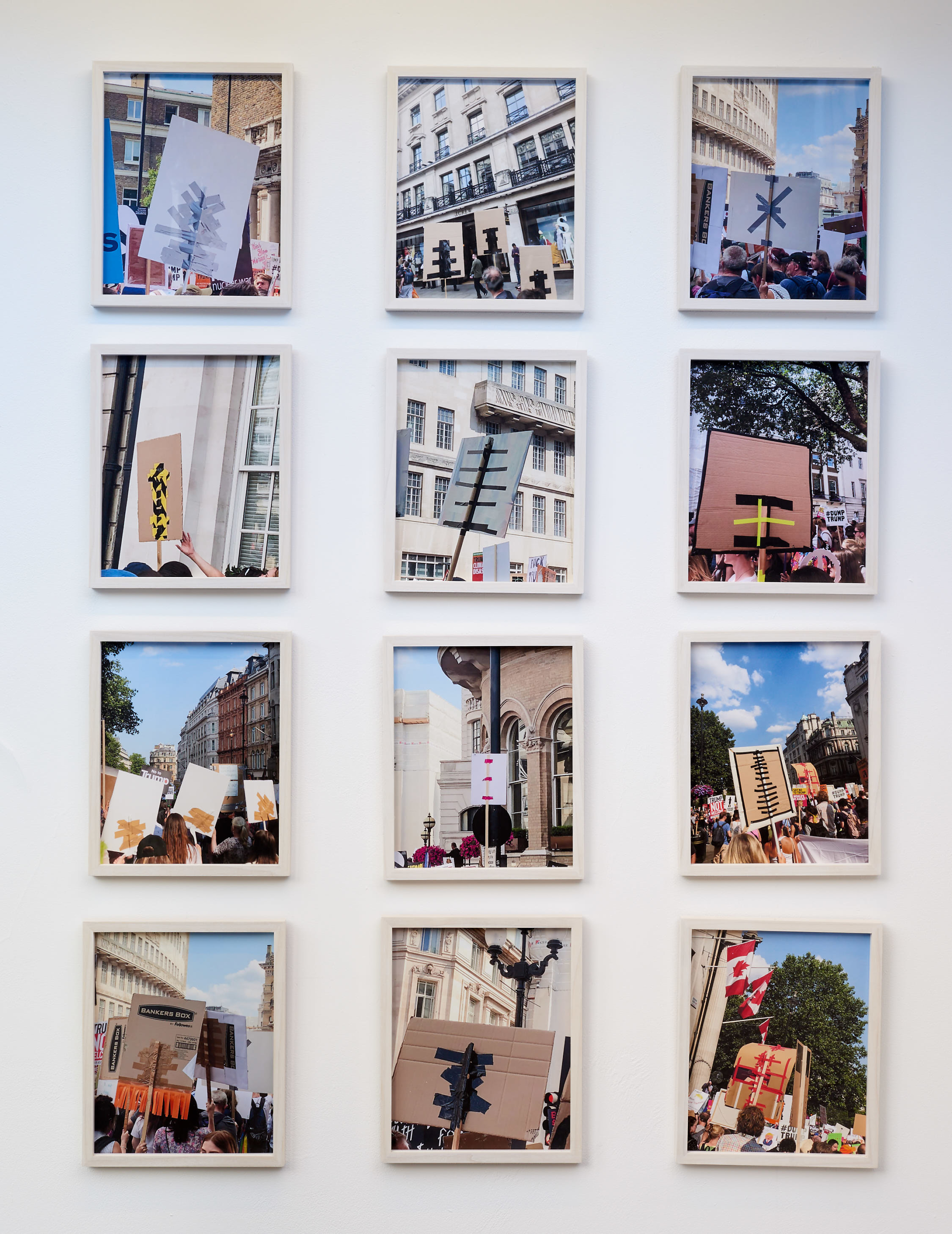 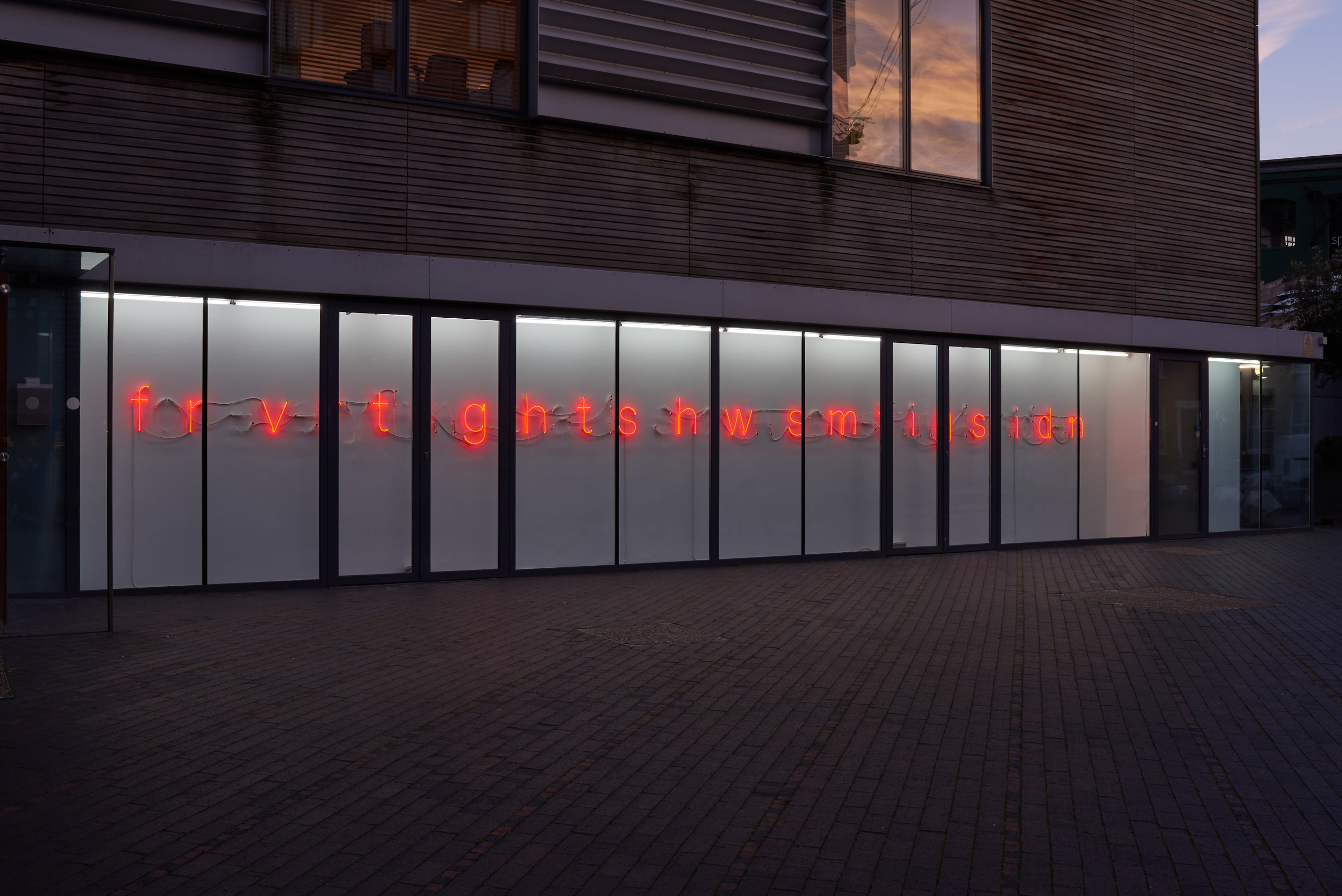 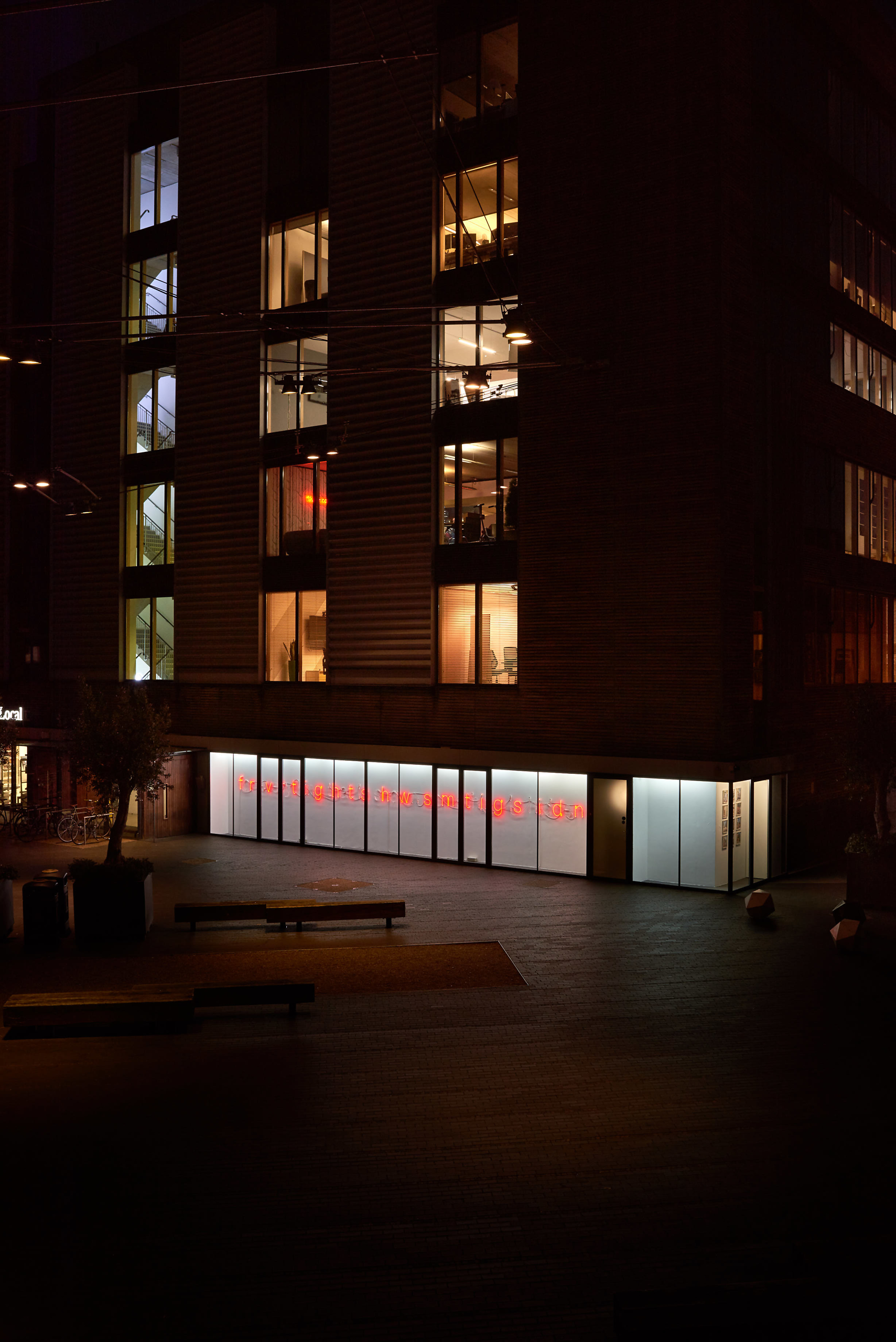 Etchells is constantly collecting language from around him: fragments overheard on the bus, in the street, in movies and in books. The phrase used in this work is taken from James Bridle’s book ‘New Dark Age’, which explores both the transparency of electronic networks and the possibilities for subterfuge they create. Situated in the gallery space, the words playfully enact themselves: with just every other letter illuminated, the phrase is disrupted, presenting initially as a random assortment of letters. It is only on closer inspection, when both the illuminated and unlit letters are visible, that the text comes into focus and a new layer of meaning is apparent.

At the planning stage of each new work, Etchells considers the transaction that takes place between the potential piece and its audience. For this project, he animates the public square and explores the implications of a work that is both seen and unseen. Occupying VITRINE’s window space ‘For Everything That is Seen’ is viewable 24-7, creating a dynamic relationship between the lit and unlit letters that change throughout the day.

Adjacent to and in a dialogue with the neon work, Etchells presents a series of photographs, titled 'From Behind',  taken during the protests that greeted U.S. President Donald Trump’s then recent visit to the UK. Taken from amidst the marching crowd, the images document the signs that protestors carried, but, rather than the fronts, we see the reverse sides of the placards, revealing the diverse arrangements and colours of crisscrossed tape that holds them together. Although some of these signs were clearly made in haste and others are neater and more efficient, all of them evidence the labour and improvisation undertaken by individual protestors in advance of the march. In contrast to the slogans of the front, which were made for presentation to an audience, the backs of these signs are less considered, and, like a theatrical stage set seen from behind, are primarily visible to those involved in the march itself.

In both  works, Etchells considers the relationship between the seen and the unseen. Documentation of the reversed protest signs reveals a procession of abstract drawings whilst in the neon, the language is playfully broken down so that only half is readily visible, a jumble of letters. In each case we become acutely aware of the mechanics of communication, and must draw closer to see the whole story.

Text, spoken and written, is at the heart of Etchells’ practice. The language he employs is playful and poetic, often using humour as a route to serious and somewhat unsettling subject matter. This new body of work is exhibited concurrently to Etchells’ sculpture commission ‘Everything is Lost’ for Frieze Sculpture 2018 in Regents Park (presented by VITRINE). ‘Everything is Lost’ also considers language at the point of its own disintegration. In this work too the letters act out their content, placed on a grid but in an unruly fashion, the text lies between the legible and the illegible, its message both obscured and revealed in the playful gesture of the work.

Tim Etchells (b. 1962, Sheffield, UK) lives and works between London and Sheffield and is Professor of Performance and Writing at Lancaster University. He has produced major commissions for public space internationally including; his poster project ‘And For The Rest’ created and presented in: Brussels (2014), Basel (2015), and Athens (2016); ‘Vacuum Days (Utrecht)’ (2016); and ’Eyes Looking’ a video installation which took over Times Square, NYC, commissioned as part of Times Square Arts Alliance ‘Midnight Moments’ series (2016).Solo exhibitions include: ‘Together Apart’, Kunstverein Braunschweig, DE (2017); ‘Open Mind’, VITRINE, Basel, CH (2017); ‘The Give & Take’, Tate Exchange, TATE Modern, London (2016); ‘More Noise’, Bloomberg SPACE (2016); ‘For Now’, Plymouth Arts Centre, UK (2015); ‘What is, and What is Possible’, Jakopič Gallery, Ljubljana, SI, (2013); ‘Neon Friday’, Battersea Arts Centre (BAC), London, UK (2012); ‘From Afar’, Bunkier Sztuki, Krakow, PL, (2011); ‘Tim Etchells’, Gasworks, London, UK, (2010); and ‘Fog Game’, Künstlerhaus Bremen, Bremen, DE, (2010).Etchells was presented by Vitrine at A Performance Affair, Brussels, Belgium (September 2018); Dallas Art Fair, Dallas, US (2016); and at Perf4m ARTISSIMA, Turin, Italy (2016). His collaboration with violinist Aisha Orazbayeva ‘Seeping Through (Decouverte)’ was performed at FIAC, Palais De Decouverte, Paris (2016).Etchells work was included in the Folkestone Triennial, Folkestone, UK, (2014); Gotenburg International Biennale, Sweden, (2011); and Manifesta 7, Rovereto, Italy, (2008). His work has been presented in group exhibitions and performance programmes at galleries and museums internationally, including: Heidelberger Kunstverein, Heidelberg, Germany (2018); Kunsthalle Mainz, Germany (2017); The Showroom, London, UK (2017); The Grundy, Blackpool, UK (2016); Turner Contemporary, Margate, UK (2015); Compton Verney, Warwickshire, UK (2015); Cubitt Gallery, London, UK (2015); Hayward Gallery, London, UK (2014); Arnolfini, Bristol, UK (2013); Württembergischer, Kunstverein Stuttgart, Germany, (2012); and Norwich Castle Museum and Art Gallery, Norwich, UK, (2011).Etchells has concurrently led the performance group Forced Entertainment, based in Sheffield since its inception in 1984. Forced Entertainment are widely considered to be one of the greatest British theatrical exports of the past 30 years, credited with producing some of the most innovative and challenging theatre of the era to great acclaim throughout the world. In 2016, Etchells was awarded the Spalding Gray Award well as the International Ibsen Award for his work with Forced Entertainment.Etchells currently has two new major public commissions: 'With/Against' in Gateshead, presented by the Great Exhibition of The North and BALTIC, and ‘Different Today’ at SITE Gallery, Sheffield. He has been selected for Frieze Sculpture 2018, Regents Park, London.