To coincide with the final day of Ilona Sagar’s ‘Mute Rehearsal’, VITRINE presents a screening of the artist's work ‘Human Factors’ alongside an artist talk with presentation of documentation from her project ‘Prosopopeia: Manual Hand Book’, commissioned by Assembly Passage. 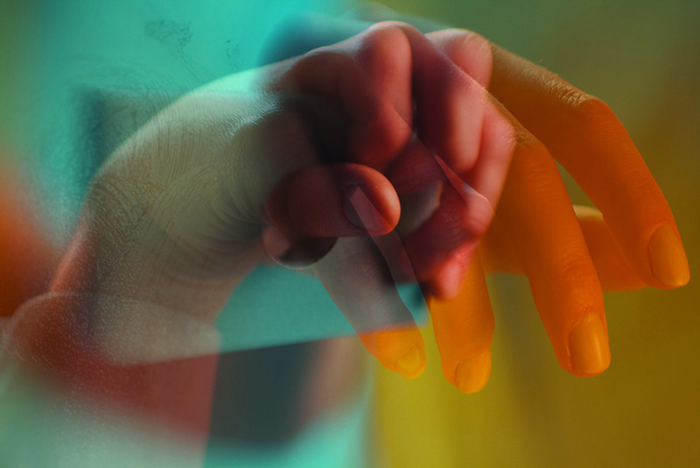 Sagar’s interest in the connection between space, architecture, language and the body thread through all three works.

‘Mute Rehearsal’ continues the artists investigation into the relationship between body, surface and displacement through its manifestation in speech and design, which was explored in her Assembly Passage commission earlier this year. Working with groups participants and dancers, and with both found and original text, ‘Prosopopeia: Manual Hand Book' and  ’Mute Rehearsal’ use gestures and body movement as an interface to examine our multi-faceted relationship to design syntaxes, as an instance of technology and flesh. ‘Prosopopeia: Manual Hand Book' approached the body as an adaptable tool rather than the symbol of a physical fit trained form, working with the performers to act out the precarious line between a functional and dysfunctional body. Whilst ’Mute Rehearsal’ hones in on female mannerisms and linguistic trends considered undesirable, such as vocal fry – the engagement of the lowest vocal register – which have received negative commentary. Controls that we as a society impose on the female body are multi-layered and complex to unpick.

‘Human Factors’, previously screened at Hayward Gallery in 2014, antagonises connection between language, hierarchies and bodily well-being through its manifestation in architecture and landscape. Although the film has no protagonist a central element of the film is a voice over. What the voice represents is abstruse, she is both lovers, landmasses, ruptured bodies, a union between political bodies.

Following the screening there will be drinks in shortwave bar, Q&A with the artist and 'Mute Rehearsal' curator, Alys Williams, and the final chance to view ‘Mute Rehearsal’.

No items found.
No items found.
Receive updates on exhibitions, shows, events, and artists.
Thank you for subscribing to our mailing list. Please check your emails to confirm.
Something seems to have gone wrong while submitting the form, please try again